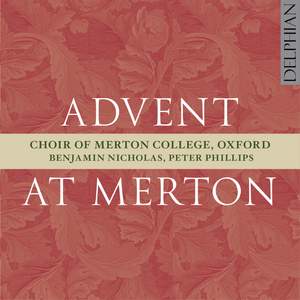 At the heart of this Advent service is a set of seven antiphons specially commissioned from seven composers for Merton College chapel. They work splendidly as a sequence...Peter Phillips and... — BBC Music Magazine, Christmas 2012, More…

Weir: Drop down, ye heavens, from above

The beginning of Advent is celebrated with a particular solemnity at Merton. For its second recording the college choir explores the musical riches that adorn this most special time in the church’s year, centring on a newly commissioned sequence of Magnificat antiphons from seven leading composers. Founded in 2008, the new Choir of Merton College, Oxford is led by newly appointed Organist and full-time Director of Music Benjamin Nicholas, and Reed Rubin Director of Music Peter Philips. The choir is rapidly emerging as a major force in collegiate choral music. The disc is recorded in the beautiful environs of Merton College Chapel, which has stood at the heart of the College as a place of worship for almost 750 years.

At the heart of this Advent service is a set of seven antiphons specially commissioned from seven composers for Merton College chapel. They work splendidly as a sequence...Peter Phillips and Benjamin Nicholas elicit high levels of technical and expressive achievement from their student charges.

The most notable chapel choir offering [this Christmas]...All the music is radiant, all of it is unexpected, including a set of seven Advent antiphons commissioned by the chaplain...and comes from a choir that's gone from being a minor player in Oxbridge choral music to becoming one of the most exciting groups in its area

an absorbing programme including seven Advent Antiphons commissioned for the choir by the Revd Dr Simon Jones … The quality of the singing throughout is very high – this is an immensely accomplished and responsive mixed-voice choir … This disc is an impressive achievement in every way … Delphian’s recorded sound is beautiful.

This richly varied collection of mainly contemporary music for Advent, most of it directed by Nicholas, is exquisitely sung...a fine seasonal disc.

The singing is fresh and opulent, and delivered with a clarity and precision that sits pleasingly with the resonant ambience of the recordings.

The radiant young voices, sumptuous acoustics and quality items s should make for gripping listening all year round.

a satisfyingly solemn, serious affair. Here, the Advent progression from hushed anticipation to bright, hopeful light is given extra weight by the varied choice of material sung...the mixture of settings ancient and modern succeeds beautifully...Lovely, in other words.