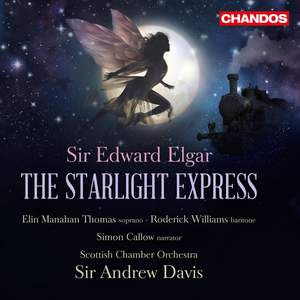 While the lyrics tend to the arch or winsome, most of the music is vintage light Elgar, and beautifully performed...This is a very valuable addition to the Elgar discography. — BBC Music Magazine, January 2013, 5 out of 5 stars More…

Act I Scene 1: To the Children

Act I Scene 1: In the village of Bourcelles in the Swiss …

Act I Scene 1: Just then a lamplighter …

Act I Scene 1: At that time, Henry had told him about the old railway …

Act I Scene 1: Oh! But I'm forgetting the most important one of all.

Act I Scene 1: They were always eager to hear his poetry

Act I Scene 1: And suddenly a new, enormous thing stirred in their father's heart

Act I Scene 1: As though on cue

Act I Scene 1: To the Children: That's odd, said Mother

Act I Scene 1: … gold and had put it on for warmth against the cool evening air

Act I Scene 1: Before them stood an extremely dishevelled figure holding a suitcase

Act I Scene 1: As Daddy took charge of the luggage

Act I Scene 1: We want to tell you something

Act I Scene 1: All the rules I swear to keep

Act I Scene 1: Are you sure you have everything you need?

Act II Scene 1: They found a clearing with the open sky above them

Act II Scene 1: Henry explained that the Pleiades had been attendants upon Artemis …

Act II Scene 1: The Sun has Gone: Now, cats are curious creatures, and Riquette was no exception

Act II Scene 1: At length Jinny came out of the cave and came over to them

Act II Scene 1: And with that the first passenger hurried by them

Act II Scene 2: In her attic chamber above

Act II Scene 3: At the Citadelle

Act II Scene 3: The Sprites had almost finished their task

Act II Scene 3: The Sprites flitted out, back to the Starlight Express

Act III Scene 2: It was late evening on the day of his arrival

Act III Scene 2: And suddenly he remembered an extraordinary conversation …

Act III Scene 2: All three children, perhaps sent back from their nocturnal enterprises …

Carey, C: 3 Songs from The Starlight Express (arr. A. Davis)

I. To the Children

IV. The sun has gone

X. Dance of the Winds

XX. Hearts must be soft-shiny dressed

Recording of the Week,  Elgar and the First World War

Sir Andrew Davis presides over a touching account of the incidental music for The Starlight Express, whilst John Wilson champions wartime rarities including Polonia, Carillon, and Le drapeau belge*; Simon Callow narrates with gusto on both recordings.

The Starlight Express was adapted from a book by Algernon Blackwood, A Prisoner in Fairyland, for a theatre production in the West End during the First World War, with music by Sir Edward Elgar. Combining the usually contrasting elements of fairytale and melodrama, The Starlight Express depicts the fantasy world inhabited by a group of children, who possess a magical ‘starlight’ quality that has been lost by the adults around them. This is the most comprehensive recorded version of The Starlight Express to date, based on a new score prepared by the Elgar Edition, which has been adapted by the conductor Sir Andrew Davis.

Our recording includes, in place of the play, a detailed account of the story, penned by the conductor Sir Andrew Davis better to reflect the original book and our pattern of speech today. ‘All the music, excepting the songs and interludes, was designed as melodrama, and in some cases it is meaningless on its own’, explains Sir Andrew, continuing: ‘I have therefore taken the bold step of writing a narrative which is based partly on the play and partly on ‘A Prisoner in Fairyland’.

Our narrator is the actor Simon Callow, known to an international audience for his roles in films such as Four Weddings and a Funeral and Shakespeare in Love. Callow was delighted to be approached, as he already knows and loves this music, having delivered the narrative in a specially recorded concert performance of the incidental music, broadcast on BBC Radio 3 in 2007. The incidental music, complete with melodramatic passages which work in conjunction with the narrative, occupies all of Disc 1 and continues onto Disc 2. Then we have an extended suite of freestanding orchestral movements and songs.

As a bonus, we have included three songs which link directly to this work. When a staged version of Blackwood’s book was first proposed, in 1914, another young composer, Clive Carey, was commissioned to compose the incidental music; but the outbreak of war forced the cancellation of the original production. When the plans were next revived, Elgar was approached, and he enthusiastically completed the score. However, Clive Carey had already composed three songs, but they were never included in the final production. They have been orchestrated by Sir Andrew Davis for this recording, and are heard here for the very first time.

Our recording of The Starlight Express is performed by the Scottish Chamber Orchestra under Sir Andrew Davis with two internationally acclaimed soloists: the soprano Elin Manahan Thomas and baritone Roderick Williams.

While the lyrics tend to the arch or winsome, most of the music is vintage light Elgar, and beautifully performed...This is a very valuable addition to the Elgar discography.

Davis secures absolutely first-rate results from the Scottish CO. Elin Manahan Thomas's light and slivery soprano could hardly be more suited to the parts of the Laugher and Jane-Anne, while Roderick Williams is in glorious voice throughout.

Those who love this score as much as Elgar did - and I do - will welcome this new recording. It really has more light and shade than Handley’s pioneering set welcome though that was at the time...all Elgarians must hear this superb set.

[Callow] throws himself into the part with such gusto that it’s hard not to be swept along by his wonderful characterisations...The real star of the recording, however, is very definitely Andrew Davis. Aside from writing the narration, he has also devised and recorded a suite of just the songs and orchestral interludes, which is ideal if you don’t quite fancy the idea of listening to the whole lot in one go.

Elgar’s score is enchanting — and Davis and the SCO deliver it with evident affection.

there are moments of top-drawer, heart-stopping Elgar here...the music can either be heard as a suite that Davis has arranged, or in the context of the winsome original story – the play replaced with an avuncular narration by Simon Callow. The songs are delivered with just the right lightness of touch

The Independent on Sunday 23rd December 2012

Elgar's score has an ageless freshness, and concludes with a handsome "The First Nowell".