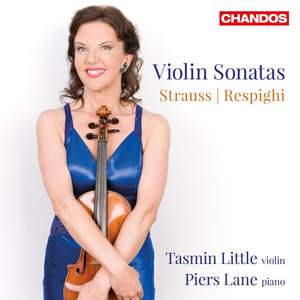 Tasmin Little and Piers Lane turn in one of the most satisfying performances [of the Strauss Sonata] I've heard. Their judicious choice of tempos allows the music to breathe naturally. They also... — BBC Music Magazine, January 2013, More…

Tasmin Little has decided to showcase works by Ottorino Respighi and Richard Strauss in her latest recital disc for Chandos. She is joined by the well-respected Australian pianist Piers Lane.

Respighi is best known for his orchestral music, and Richard Strauss for both his orchestral music and operas, and therefore their chamber music has tended to take a back seat, however unfairly. On this disc we explore a few such neglected works, all of which display the full range of emotion, drama, harmonic exploration, and technical brilliance that characterised romanticism at its height.

Respighi wrote his Violin Sonata at the peak of his creative powers. Full-blooded and romantic, it explores both Italian lyricism and powerful dramatic gestures, and as such provides both instrumentalists with a virtuoso workout. The composer’s Sei pezzi (Six Pieces) for violin and piano inhabit the very different world of intimate salon music. Tasmin Little and Piers Lane have chosen three of the six pieces for this disc. No. 2, Melodia, is the only one originally intended for violin and piano, a brief, but lovely song without words. No. 4, Valse caressante, was written first for piano solo and, with its lolloping melodic lilt, is appropriately titled. Finally, No.5, Serenata, is based on material from Respighi’s first opera, Re Enzo, composed in 1904 – 05.

The Violin Sonata of Richard Strauss represents a crossroads in his creative journey. On the one hand, the language evokes the rigour and definition of Strauss as we know him. On the other, the sonata is an abstract work, not far removed from the dramatic sound-pictures and high romanticism so characteristic of the works of Liszt and Wagner.

Tasmin Little enjoys a flourishing career that has taken her to every continent and major orchestra around the world. She continues to champion seldom-performed repertoire, and her playing helped secure the Critics’ Choice Award at the 2011 Classic BRIT Awards for the Chandos recording of Elgar’s Violin Concerto, with alternative cadenza, and rarely heard Polonia. In great demand as a chamber musician, Piers Lane has given sold-out recitals at the Wigmore Hall, London and the opening recital at the new Melbourne Recital Centre.

Tasmin Little and Piers Lane turn in one of the most satisfying performances [of the Strauss Sonata] I've heard. Their judicious choice of tempos allows the music to breathe naturally. They also display an intense sympathy with Strauss's melodic style, especially in their delicate and atmospheric account of the slow movement...[the extracts from Sei Pezzi] make for an enjoyable filler.

Both sonatas are played here with complete understanding and spontaneity, and bring moments of true musical virtuosity. Piers Lane is a first-class pianist and forms a fine partnership with Tamsin Little, whose tone is caught with great beauty, for the Chandos recording is completely real and naturally balanced.