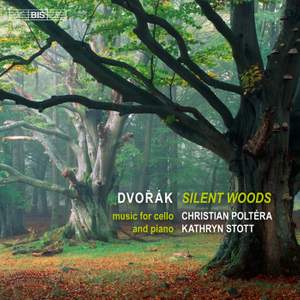 Original works and transcriptions for cello and piano

This recording bathes the listener in a stream of irresistable song that lingers in the memory weeks later. It also proves how well the composer's lyricism translates across timbre and sonority:... — BBC Music Magazine, January 2013, 4 out of 5 stars More…

On this disc, Christian Poltéra and Kathryn Stott chart the gradual development in Dvořák’s composition for cello.

The disc includes chamber works that Dvořák composed originally for cello and piano or arranged for the combination including Polonaise in A major, the Rondo in G minor and Silent Woods which was originally a piano duet.

Poltéra also presents his own transcriptions of several violin pieces and songs, including the Violin Sonatina, and Lasst mich allein, alongside the ever-popular Songs My Mother Taught Me and Song to the Moon from Rusalka.

Christian Poltéra and Kathryn Stott are regular chamber music partners and have previously recorded music by Honegger and Frank Martin.

This recording bathes the listener in a stream of irresistable song that lingers in the memory weeks later. It also proves how well the composer's lyricism translates across timbre and sonority: this 'Song to the Moon' is as searingly effective as any I've heard sung...the recorded sound is ideal.

[the Sonatina] works particularly well in its new baritone and tenor register...This attests to both the sensitive way in which Poltera has adapted the music to the cello medium and to the deft and affectionate manner in which he plays it. So natural does the Sonatina sound on the cello that you wonder why Dvorak himself never thought of doing it.