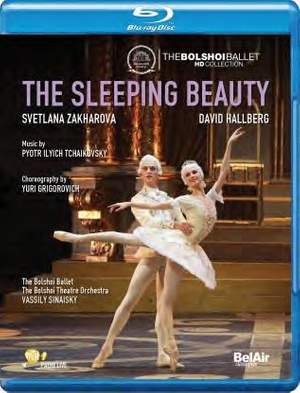 Tchaikovsky’s ballet in a new production for the reopening of the historic Bolshoi Ballet stage. It also celebrates superstar David Hallberg's Bolshoi debut, the first American principal soloist ever to be hired by the Bolshoi Ballet. The choreographer, Yuri Grigorovich presents a new version of his most famous choreography for a breath taking experience in splendid sets designed by Ezio Frigerio and more than 400 new costumes designed by Franca Squarciapino.

The American superstar dancer David Hallberg is Prince Désiré. Hallberg is the first main american soloist ever to be hired by the Bolshoi Ballet. Princess Aurora is danced by the principal Svetlana Zakharova, well known to Parisian audiences thanks to her many performances at the Palais Garnier. She is also the soloist on the best seller 'Pharaoh's daughter' DVD released by Bel Air Classiques in 2004. They are joined by a great cast : Maria Allash (Lilac Fairy) , Artem Ovcharenko (Bluebird) and Nina Kaptsova (Princess Florine). The Bolshoi Theatre Orchestra is conducted by Vassily Sinaisky.

Grand-scale performance of the Petipa masterpiece, with Zakharova miraculous in the lead

Unashamedly traditional, gloriously staged, with a tremendous cast … pin-sharp clarity and fine sound … essential viewing. It is no exaggeration to say that even without Tchaikovsky’s music, the sumptuousness and elegance of the screen images are such that one could enjoy it as a purely visual experience. Add to that one of the most radiantly inspired orchestral scores of the nineteenth century and the results are quite simply irresistible.