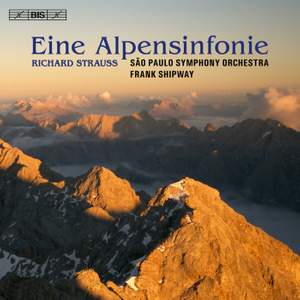 The night opening is evocatively veiled, the mountain theme especially, and moves organically to its spiritual sunrise. Throughout there's a natural sense of pace between vigorous clambering... — BBC Music Magazine, March 2013, More…

Eintritt in den Wald (Entry into the Wood)

Am Wasserfall (At the Waterfall)

Auf dem Gletscher (On the Glacier)

Auf dem Gipfel (On the Summit)

The Alpine Symphony is a symphonic poem and is the last in a series of works that includes such masterpieces as Don Juan, Also sprach Zarathustra and Ein Heldenleben. The work is divided into 22 sections that flow in an unbroken sequence, marking the ascent and descent of the mountain, from before sunrise to after sunset. The work makes use of Strauss’ entire repertoire of orchestral pictorialism.

The opera Die Frau ohne Schatten, used an even more opulent orchestration than the Alpine. It wasn’t until 1946 that Strauss, in his 82nd year, returned to the score in order to make his Symphonic Fantasy, based on highlights from the opera.

The night opening is evocatively veiled, the mountain theme especially, and moves organically to its spiritual sunrise. Throughout there's a natural sense of pace between vigorous clambering and spacious nature panoramas. Shipway moulds his strings to sit every situation...I'd be very happy to hear more Strauss from this remarkable team.

A dramatic case of fire and ice if ever there was one...You might argue that nobility has to some extent been sacrificed to the brazenness of the playing but you cannot deny the fervour of what they bring. I don't know of a more exciting account on disc.