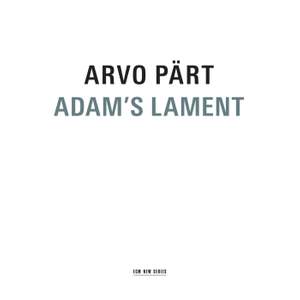 Marshalling orchestral and choral forces under the direction of Tonu Kaljuste, this new Arvo Pärt album, produced by Manfred Eicher and realized, like all Pärt’s ECM discs, with the composer’s participation, is a major event. Sacred music predominates, by turns monumentally powerful and tenderly fragile.

The title piece (commissioned by the cultural capital cities Istanbul and Tallin in 2010 and 2011) uses a poetic text by Silouan of Athos to emphasize our common heritage in the figure of Adam. When setting Adam’s Lament which, for Pärt, has great poetic, expressive power with its central message of love and humility, the composer internalised Silouan’s words completely; they determined the substance and structure of the text (sung in ecclesial Slavic), its punctuation, number of syllables and accentuation of the music down to the smallest detail. “That perfect melding caused me somehow to think less of a work of art when I was composing.”

Tonu Kaluste is one of the outstanding interpreters of his countryman’s music. No other conductor has his gift for allowing Pärt’s works to breathe so freely in the choirs and orchestras he leads. He has already recorded many of Pärt’s pieces for ECM with the two ensembles he founded, the Estonian Philharmonic Chamber Choir and the Tallinn Chamber Orchestra. Other important interpreters of Pärt here include the Riga Sinfonietta, the Latvian Radio Choir, and Vox Clamantis, with its wide repertoire, from medieval to modern.

From the powerful opening gesture based on a series of plagal cadences to a foreboding final section, Adam's Lament encompasses a diverse and at times exhilarating range of dissonance and consonant moods.

It's one of the most captivating performances of the work that I've heard, with singing of the highest polish - the Latvian Radio Choir and the Sinfonietta Riga achieve a fastidious balance, with every last detail ringing out.

This is an Arvo Pärt release which has everything going for it: superb music superlatively performed and recorded in the atmosphere in which it was created...the whole thing, and certain moments in particular, make me shed a tear of awe and respect - refreshed in the knowledge that we can still create generously wondrous things from mean-tempered scales.

[Adam's Lament is] an absorbing, meditative piece, if less beholden than usual to the composer's technique of tintinnabullation.

The mix of Orthodox-style chant, ethereal string writing and block-like vocal writing amalgamates Pärt's most familiar styles, but the whole has more contrast and colour than usual. In this world premiere recording, the Latvian Radio Choir, Vox Clamantis and Sinfonietta Riga perform with admirable commitment.