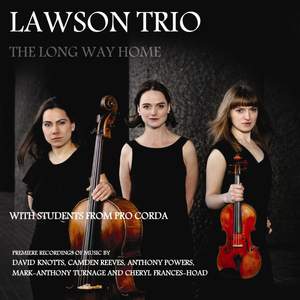 This is a brave debut from the Lawson Trio, but a wise one. Not just formidable young musicians, they are questing spirits who have shown a rare commitment to the creation of new music, so it's... — BBC Music Magazine, March 2013, 5 out of 5 stars More…

IV. The Trees They Grow so High

I. Archery and Curling

The acclaimed Lawson Trio - pianist Annabelle Lawson, violinist Fenella Humphreys and cellist Rebecca Knight - release their much anticipated debut album, The Long Way Home. It is fast emerging as one of the finest ensembles of its generation. Known for its enthusiastic championing of contemporary British composers, the Lawson Trio showcases on this first CD world premiere recordings and works written especially for them.

Compositions are ‘The Long Way Home’ by David Knotts (b. 1972) - a lyrical tribute to the poetry of Sylvia Townsend Warner; ‘The Dead Broke Blues Break’ by Camden Reeves (b. 1974) - a jazz-inspired piece recalling the sound world of pianist Thelonious Monk; the Piano Trio by Anthony Powers (b. 1953), a soulful five-movement work based on folk song; ‘A Fast Stomp’ by Mark-Anthony Turnage (b. 1960) - an energetic, unrelenting Scherzo and Trio; and finally ‘Five Rackets for Trio Relay’ by Cheryl Frances-Hoad (b. 1980) - a witty double piano trio (thought to be the first of its kind) celebrating the 2012 London Olympics/Paralympics and also featuring three young musicians from Pro Corda.

The Lawson Trio has recently performed at the South Bank Centre, Kings Place, the Bath International Festival and in Aldeburgh, where they enjoyed a strings residency. Selected by Music in the Round, the Park Lane Group, Making Music and the Cavatina Trust for the 2011/2012 season, forthcoming engagements include two performances in the Wigmore Hall’s 2012/2013 season and further concerts at Kings Place and at music clubs and festivals around the country.

This is a brave debut from the Lawson Trio, but a wise one. Not just formidable young musicians, they are questing spirits who have shown a rare commitment to the creation of new music, so it's right that their first CD boasts no fewer than five premieres of works written for them. These are rich pickings indeed.

Best of all is Camden Reeves’s The Dead Broke Blues Break, evoking and vigorously transforming the blues as imagined on a warped 78 record.