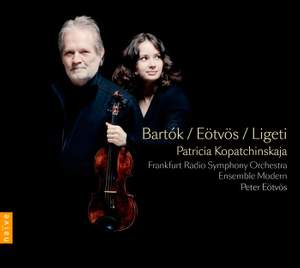 This is the fourth recording by Patricia Kopatchinskaja on naïve; the second in the concerto repertoire. The collaboration with conductor/composer Peter Eötvos and the programme is an intense series of connections. Between Bartok, Ligeti, Eotvos and Kopatchinskaja, there are many links: Hungary, the land of the 3 composers featured; Peter Eötvos was the conductor of the first performance of the second version of Ligeti violin concerto, in 1992, with Ensemble Modern; Patricia Kopatchinakaja and Peter Eötvös have been working together for 4 years, performing several concertos, including those recorded here.

Beyond those connections, this recording features 2 highs from 20th century violin repertoire and the world premiere recording of Eötvös’ 'Seven' which refers to the loss of the Columbia space shuttle in 2003, and which caused the death of all seven of its occupants.

“Between heaven and earth, past and future, I sank for a moment into the Hungarian cosmos and sensed whispers, fragments and signs of living and immortal souls. From light and darkness, dream and wakefulness, music burst forth.” Patricia Kopatchinskaja

Kopatchinskaja marries consummate technical brilliance and an amazing aural imagination wiuth a capacity to bring completely new interpretative perspectives to some very familiar music. This...may well be her finest achievement to date. She is absolutely in her element, drawing on her vast experience of eastern European folk music to create a sound palette that encompasses a staggering range of colours and inflections.

Kopatchinskaja performs these three concertos by composers born in Hungary with her trademark panache and the recorded balance gives her all due prominence. The importance of the orchestral contribution can't be denied, however, and there's an impressive sense of common purpose and collaborative zeal throughout.

this is playing with real bite … her dynamic range is frequently daring … In Kopatchinskaja, Eotvos couldn’t wish for a more committed advocate for his concerto, completing an absorbing, fascinating release

She is clearly the dominant force in these recordings, though Peter Eötvös does not take a backseat in his partnership role. With immediate sound, these impassioned performances grab you from the beginning and never let go.

Kopatchinskaja’s recording [of the Bartók] lacks nothing of the bite and raw energy integral to this work, and it is hard not to be drawn into such a vigorous and passionate performance.

These three Hungarian concertos are all impressive works...Despite the huge technical challenges thrown at her, Patricia Kopatchinskaja plays with a deep and selfless understanding of each score.

Patricia Kopatchinskaja is clearly an immensely able violinist, and she projects the Eötvös with wonderful confidence, but her rather brittle style is better suited to the sparkling polyrhythms of Ligeti's work than to Bartók's brand of neoclassicism

An embarrassment of riches here - it’s hard to know where to start...Kopatchinskaja’s performance [of the Bartók] is gutsy, gritty and astringent...[the Ligeti] is is bonkers, but in an incredibly sophisticated, profoundly musical way...[the Eötvös] is a brilliantly scored yet elusive work.