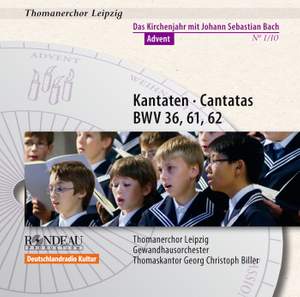 The liturgical year with Johann Sebastian Bach: in celebration of the 800th anniversary of Thomanerchor Leipzig (St Thomas’s Boys Choir Leipzig), Rondeau Production is publishing a ten-part CD series which presents a selection of cantatas for the liturgical year. In Leipzig, music for the liturgical year has an especially well kept tradition: up to the present day Thomanerchor Leipzig (St Thomas’s Boys Choir) and the Gewandhausorchester (Gewandhaus Orchestra) join forces each week in the performance of one of Johann Sebastian Bach’s cantatas at the church of St Thomas.

Following the publication of discs with cantatas for the Reformation, Christmas, and Pentecost, the newest release is the fourth recording of the ten-disc series: it presents the cantatas Schwingt freudig euch empor BWV 36 and Nun komm, der Heiden Heiland BWV 61 and 62 which Johann Sebastian Bach composed for performances on the First Sunday of Advent. As cantor at St Thomas Leipzig he followed the town’s adherence to the practice of tempus clausum, the period of silence: no polyphonic music was performed in services between the Second and Fourth Sundays of Advent.

The current cantor at St Thomas, Georg Christoph Biller, is fortunate to have boys from the choir’s own ranks performing the soprano and alto solos; a hallmark of the new recording’s unique level of artistry.