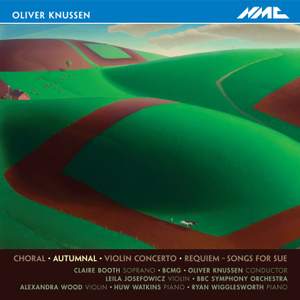 this CD should do more than any live performance to tell the world what a treasure he is. The Walton-esque Violin Concerto, Knussen’s masterpiece, is played with dazzling artistry by Josefowicz...[the... — Financial Times, 20th October 2012, 4 out of 5 stars More…

I. When I heard the learn'd astronomer

III. The Dalliance of the Eagles

IV. The Voice of the Rain

Knussen started composing at the age of 6. In 1968, aged 15 he stepped in to conduct his Symphony's premiere at the Royal Festival Hall after István Kertész fell ill. Upon hearing this, Daniel Barenboim asked him to conduct the work's first two movements in New York a week later.

This disc features the dynamically virtuosic violinist Leila Josefowicz, who has worked with many of today's leading composers – including John Adams and Oliver Knussen – and is a strong advocate of new music.

Oliver Knussen is a huge infl uence on the contemporary British music scene - not only as composer, but as conductor, teacher, programmer and artistic director. Despite having started composing as a teenager, his oeuvre is relatively small – partly due to his busy schedule as a conductor (he must surely hold the record for premiere performances!), but also because every bar he writes is measured against all the music that he knows and loves.

This new recording, to celebrate Olly's 60th birthday, is a chronological tour of his work, starting with the brooding orchestral Choral, and the poetic Autumnal for violin (both written in the 1970s), through to Ophelia's Last Dance from 2010. Requiem: Songs for Sue, was written following the death of his wife in 2003, and sets texts by poets who were important to them both – from Emily Dickinson's poem to her sister Sue, "Is it true, dear Sue?" to works by Antonio Machado, WH Auden and Rainer Maria Rilke – the latter translated by Olly's friend and musical collaborator Alexander Goehr.

Also on this disc is a live recording of Knussen's luminous Violin Concerto, performed at the BBC Proms by one of the world's exemplary soloists (and ex-Chanel model) Leila Josefowicz.

this CD should do more than any live performance to tell the world what a treasure he is. The Walton-esque Violin Concerto, Knussen’s masterpiece, is played with dazzling artistry by Josefowicz...[the Requiem is] sung with nightingale seductiveness by Claire Booth.

Claire Booth brilliantly manages the music's kaleidoscopic shifts of rhetorical focus and is equally successful in the earlier group of Whitman settings, given here in the version with piano accompaniment.

The performances, several from the artists such as Josefowicz and Claire Booth for whom the works were written, are superb, and much of the music ranks among the finest composed in this country in recent decades.

an enthralling tribute to one of the greatest of contemporary composers...This disc offers us contemporary music to swoon over...Knussen’s ear for colour rarely falters...He can suggest music of the past without ever resorting to parody...This is music which just works. Try and whistle back the melodies, and you’d struggle, but Knussen’s skills as an orchestrator and architect always win the listener over.