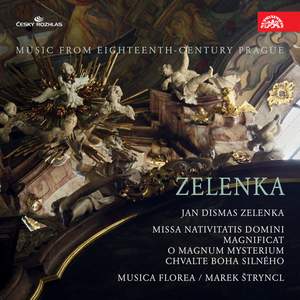 It is hugely persuasive music and is performed here by the period instrument group Musica Florea under Marek Štryncl with real tenderness and commitment. Soloists and choir are in good voice,... — Chris O'Reilly, Presto Classical, 3rd December 2012 More…

Lesser-known works of Jan Dismas Zelenka – music (not only) for Advent and Christmas.

Following on from the previous two titles (Sepolcri, SU40682; Melodrama de Sancto Wenceslao, SU41132), Supraphon’s Music From Eighteenth-Century Prague series now reflects Prague-related works by Jan Dismas Zelenka (1679–1745), whose pieces were performed at the city’s churches with increasing frequency from the middle of the 1730s.

One such composition was Missa nativitatis, ZWV 8, preserved at the Saint Nicolas Church in Prague’s Lesser Town; another copy is from C. Ph. E. Bach’s personal effects, which indicates that this very piece was one of the two Zelenka masses his father Johann Sebastian had in his library.

The aria of the Christmas motet O magnum mysterium is derived from the mentioned melodrama; Zelenka furnished it with a different text and added two flutes. The motet Chvalte Boha silného (Praise God Almighty), a setting of Psalm 150, is most likely the one and only Zelenka piece to a Czech text and has only been preserved in Prague copies.

The Advent spirit is supplemented by with the Marian hymn Magnificat. Zelenka’s lesser-known works are once again presented within the acclaimed Supraphon series by Musica Florea, a renowned Baroque orchestra who stood at the beginning of the modern discovery of this exceptional composer.

It is hugely persuasive music and is performed here by the period instrument group Musica Florea under Marek Štryncl with real tenderness and commitment. Soloists and choir are in good voice, and the disc also contains a couple of world premières.