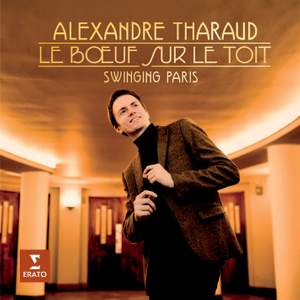 This is fun...Tharaud's varied programme captures the frenetic, vibrantly eclectic melting pot of 1920s Paris...The charms of this beautifully packaged disc are hard to resist. — BBC Music Magazine, February 2013, 4 out of 5 stars More…

Gershwin: Gershwin / Arr. Doucet & Wiéner: Why Do I Love You?

The French pianist and friends (including Natalie Dessay, Madeleine Peyroux, Juliette and Bénabar) get together for a joyous compendium of music by regular visitors to the eponymous Parisian nightclub during the 1920s, including Ravel, Milhaud, and Clément Doucet.

In a startling new departure for the French pianist Alexandre Tharaud, he invites a diverse group of musical friends to join him in celebrating Le Boeuf sur le toit, the legendary Paris cabaret that became a hotspot of Parisian and international culture in the heady 1920s. A confluence of jazzy musical currents brings together French composers like Ravel, Milhaud, Wiener and Doucet and American songwriters like Gershwin, Kern and Porter.

“This CD, ‘Le Boeuf sur le toit’, is completely different from anything I have recorded up till now,” says Alexandre Tharaud. While each of his previous Virgin Classics albums has focused on a single composer – Bach, Scarlatti, Chopin – here the French pianist presents more than 20 items by a kaleidoscope of musical talent from both classical and popular milieux: Ravel, Milhaud, Gershwin, Kern, Porter, Kalman, W.C. Handy (the so-called Father of the Blues), the French piano duo Wiener and Doucet and more.

Their point of convergence is the legendary Paris cabaret, Le Boeuf sur le toit, a hotspot and melting pot of Parisian and international culture in the heady 1920s. Its name – meaning ‘the ox on the roof’ – was appropriated by the cabaret’s owner, Louis Moysès, from the composer Darius Mihaud, who had used it for a celebrated orchestral score, written after a visit to Brazil and filled with syncopated dance rhythms. Jean Cocteau, the Renaissance man of French artistic life in the mid-20th century, brokered the deal.

As Tharaud explains: “Cocteau – who was there almost every evening and sometimes used to play drums with the marvellous pianist and composer, Jean Wiener – embodied the spirit of Le Boeuf sur le toit. The pianist Clément Doucet also used to play there regularly. And, in the restaurant every evening, you would come across composers like Maurice Ravel, Erik Satie and the members of Les Six, like Francis Poulenc, Darius Milhaud, Germaine Tailleferre. ... or perhaps Stravinsky. There were French popular singers like Maurice Chevalier, Yvonne Georges, Mistinguett, Kiki de Montparnasse and then, among the throng, lots of artists, such as Man Ray, Picabia, Diaghilev, Coco Chanel, Georges Simenon, André Gide ... Though they came from different worlds, everybody on the Paris scene came to Le Boeuf sur le toit for jazz and new music amidst the excitement of the Roaring Twenties.” The cabaret’s importance in the history of jazz can be gauged by its immortalisation in the French term for having a jam session, ’faire le boeuf’.

“I really think that French music would not have been the same without Le Bœuf sur le toit,” continues Tharaud. “The programme for this CD includes piano pieces that were played there on a regular basis, written by Jean Wiener, Clément Doucet and Darius Milhaud, but also by American composers who probably never set foot there, such as George Gershwin and Jerome Kern.”

Tharaud is joined on this disc by a hand-picked group of colleagues. From the world of classical music come: the pianist Frank Braley (“He is crazy about Gershwin,” explains Tharaud); the percussionist Florent Jodelet; the tenor Jean Delescluse and, singing (or doing the vocal trumpet more precisely) a blues by Jean Wiener, the soprano Natalie Dessay, one of Virgin Classics’ highest-flying artists. Joining Tharaud from the world of jazz and popular music are the guitarist David Chevallier (here on banjo) and three singer-songwriters: Madeleine Peyroux (an American of French extraction) and two French artists very much in the idiosyncratic tradition of the French chansonnier, Juliette and Bénabar. The actor Guillaume Galliene, an resident of France’s most prestigious theatre, the Comédie-Française, takes on a cheeky comic song.

Touchingly, Tharaud also sees this disc as a tribute to his grandfather, Charles Auvergne, a classical violinist who in the 1920s used to play in cinema orchestras, dance bands and brasseries and in the recording studio for singers. “He was an all-round musician,” says Tharaud, “and I like the idea of being a musician who interprets music in a broad sense, who can experience music to the full, whether it’s a little popular song or a grand concerto by Rachmaninov ... from the opera house to a little café.”

This is fun...Tharaud's varied programme captures the frenetic, vibrantly eclectic melting pot of 1920s Paris...The charms of this beautifully packaged disc are hard to resist.

67 minutes of pure musical sunshine. Much of the delight comes from the unexpectedness of the programming...Any caveats? Short of the addition of an audience to add some ambient sound, no...A disc to charm, to delight and to chase away the winter blues.

To describe this record as the ultimate in classy background music is to do it a disservice (the performances are mesmerising, and easily compelling enough to command your undivided attention in a single sitting), but really this is a disc that cries out to be enjoyed with a group of friends, great conversation and a bottle or two of something delicious.

The Independent on Sunday 21st October 2012