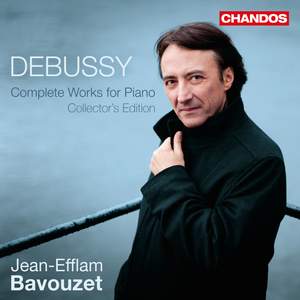 No. 3. Jardins sous la pluie (Gardens in the Rain)

III. Serenade for a Doll

No. 1. Cloches a travers les feuilles

Tableau 3: La bergerie a vendre (The Sheepfold for Sale)

Jean-Efflam Bavouzet’s vivid and personal interpretations of Debussy’s complete works for piano are available for the first time in an attractive five-volume box set, selling for the price of three CDs. This is the series that put Bavouzet on the map, and established him firmly as a leading and internationally acclaimed pianist.

The second disc reveals a more reflective, private period in Debussy’s compositional career. In the dedication of the three Images, Debussy wrote: ‘These pieces would feel extremely nervous entering “the brilliantly lit salons” regularly patronised by people who don’t like music. They are rather “conversations” between the Piano and Oneself.’ LA Times wrote: ‘In what may turn out to be the greatest complete recorded survey of the composer’s piano music yet, Jean-Efflam Bavouzet… plays with such bracing clarity that hearing the early Romantic pieces, one feels like jumping into an icy pond after an hour in the sauna.’

On Disc 3, the music moves to a more playful strand in Debussy’s output, with generally shorter pieces of the salon genre, including the two famous collections Children’s Corner and Suite bergamasque. Of Disc 4, which won a Gramophone Award in 2009, the magazine Pianist wrote: ‘Trust me, both the Images and Études easily conquer any other modern recording.’

The fifth and concluding disc brings together the ballets Khamma, Jeux and La Boîte à joujoux, all far better known in their orchestral guise, but here performed in Debussy’s initial versions for solo piano. This disc was an Editor’s Choice in the magazines Gramophone and Classic FM and nominated for a Gramophone Award in 2010, in the instrumental category.