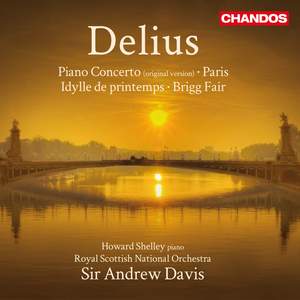 Delius's piano writing isn't that of a natural virtuoso, but here Shelley transforms it with some really sensitive phrasing and an ability to make the patterns of the figuration sound idiomatic...Davis... — BBC Music Magazine, Christmas 2012, 5 out of 5 stars More…

Of the works performed here by the Royal Scottish National Orchestra under the prominent Delius interpreter Sir Andrew Davis, the first three (Paris, the Piano Concerto, and Idylle de printemps) offer a fascinating insight into the early years of the development of Delius as a composer, when he was slowly and painstakingly honing his craft, and assuming the characteristic personal voice that is evident in more mature works such as Brigg Fair.

Paris, sub-titled ‘The Song of a Great City’, is strongly inspired by the composer’s many years of living and working in Paris. With large-scale orchestral forces, Delius paints opulent pictures of a city that he obviously loved. The slow opening portrays the still darkness falling over Paris; then the music changes pace and takes us through the teeming and intoxicating nightlife of the city, with impressions of exuberant dance music coming from the many cafés and music-halls. The opening material returns, culminating in the sounds of the awakening streets.

Until recently Delius’s Piano Concerto has been know exclusively in its final, one-movement form, which was first performed in London in 1907. The version recorded here, however, represents the composer’s earlier thoughts, from 1897. Performed by Howard Shelley, the work is brimming with full-bodied romanticism while showing the influences of Grieg and Liszt throughout.

The airy mood of Idylle de printemps points to later depictions of nature in Delius’s music, as in Brigg Fair, which Delius categorised as ‘An English Rhapsody’. Cecil Gray, the Scottish music critic and composer, described the opening of Brigg Fair as ‘evoking the atmosphere of an early summer morning in the English countryside’. The work is based on a folk-tune which came to light in a competition instigated by Percy Grainger in 1905 to find ‘the best unpublished old Lincolnshire folk song or plough song’. Grainger was immediately taken with the folk-tune, and having arranged it himself for solo tenor and chorus, he approached Delius to write orchestral variations on it – urging him on as the only composer worthy of the task. Delius was soon persuaded, and Brigg Fair became one of his best-loved works.

Delius's piano writing isn't that of a natural virtuoso, but here Shelley transforms it with some really sensitive phrasing and an ability to make the patterns of the figuration sound idiomatic...Davis proves himself an instinctive Delian in the way he delineates the shifting moods and colours of Paris and Brigg Fair: these must be among the best current accounts of both works.

Shelley and Sir Andrew Davis bring rather more in the way of epic ambition and romantic ardour to this likeable music [the Concerto] than do their Hyperion rivals, though at times greater rhythmic snap would not have gone amiss...As for the remainder, Davis makes a lovely job of the early Idylle de printemps.

I believe that Andrew Davis is possibly the greatest conductor of this music since Beecham. Davis is so in touch with the unique qualities of Delius's genius as to cause one to stop and reconsider the music...I cannot image any of the works on this eminently desirable disc being better performed than they are here