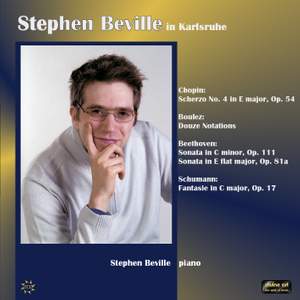 Acclaimed as a ‘one of the most talented young musicians to emerge from the UK’ by the Frankfurter Neue Press, Stephen Beville made his ‘concerto debut’ while still at school, and has gone on to perform with orchestras such as the Baden-Philharmonie.

From 1989 to 1994, Stephen attended the Royal Academy of Music (Junior Academy) learning composition, piano and conducting. Having won a Yamaha scholarship, he read Music at the Universities of York and Huddersfield. During this time he studied the piano privately with Peter Katin. He graduated in 1998 with First Class Honours and was awarded the Wilfrid Mellers prize and the Rodwell prize. Stephen continued his studies at the Royal Northern College of Music in Manchester. He was awarded the Postgraduate Diploma and Mmus in Performance with Composition, as well as the Professional Performance Diploma with Distinction - the highest accolade of the RNCM. He is the winner of RNCM scholarships for piano and composition and the recipient of the Lucy Pierce Award. He has performed with the RNCM Symphony Orchestra, Chamber Orchestra and New Ensemble in a range of music, not least his own work.

In 2001, Stephen won a scholarship to study in Germany at the Staadt Hochschule fur Musik, Karlsruhe, Germany. There he obtained two Konzertexamens for piano and composition with highest marks. In addition, he received a scholarship from the Heinrich Strobel Foundation (Freiburg) to support his studies, where he explored possibilities of live instrumental performance with electronic resources available at the computer studio. This resulted in compositions with piano such as The Echoing Sky, Three Michelangelo Pieces and Fashionism – Scenes of Youth for electric guitar, piano, percussion and electronics. All have been performed to critical acclaim – the first piece in collaboration with the Badische Konservatorium to mark 400 years of keyboard music. In 2011, a first volume of his music was published by the Berlin-based music publishers Simon- Verlag für Bibliothekwissen.

As soloist, Stephen has given recitals throughout Britain and Germany, his performances receiving outstanding reviews. In addition he has made recordings and given interviews for SWR (South West German Radio). This is his commercial CD recording debut.