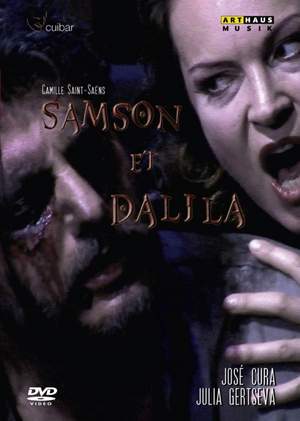 In this saga of hatred and holy war, of power and desire, there is no victor and no truth. The god-like is diminished, power restricted, taboos are broken, love betrayed. Only the composer can afford uninterrupted pathos in the wonderful duet of Samson and Dalila in the second act, which misleads us to believe in a moving story of love. Perhaps it truly is. The story of Samson is contradictory, it is human. Camille Saint-Saëns completed the work in 1876, but was only able to bring about its first performance in 1877 through the mediation of his friend Franz Liszt – with pre-eminent success – in Weimar. In France, where the elements of oratorio and the influence of Wagner were not well received, the first performance would not follow for another 13 years. Samson et Dalila ranks among the masterpieces of 19th century French Opera - and among the showpieces favored by the Argentine tenor José Cura. In the recorded production he saw himself celebrated on stage as a unified three-in-one: eponymous hero, director and stage designer.