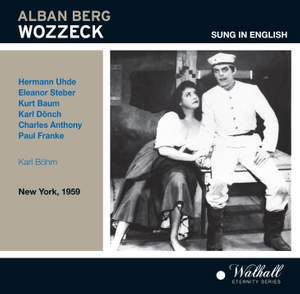 "Rudolf Bing increased the artistic stature of the Metropolitan Opera by presenting Alban Berg's Wozzeck last night. Regarded now as a "classic" in Europe, this 34-year old contemporary opera is unique, whatever the public response to it. Since the box office proved "disastrous" as far as benefiting the Metropolitan Opera Guild's production fund, the success of the first performance must be treated as solely artistic. For that Bing deserves hearty congratulations. He has fulfilled an important obligation to the public and one of his own ambitions in bringing "Wozzeck" finally to the Met. Mixed with the cheers at the final curtain there were a very audible number of boo's. The latter provided their own commentary on those who uttered them because they indicated a woeful lack of awareness of the contemporary musical world of which "Wozzeck" is a significant part. They also overlooked a splendid production, one of the most exacting ever undertaken in the Met's entire history… Karl Böhm won the ovations of the evening, deservedly. Conducting this score must be considered a major triumph at any time. The work it involved stretched back to the [beginning] of the opera season 19 weeks and 24 orchestral rehearsals later (unprecedented in the history of the Met), he achieved a remarkable performance. It may not have registered all the nervous tension and frightening aspect of the early portion of the opera, but it revealed unforgettable texture of sound in the last act." Review by Miles Kastendieck in the New York Journal-American

Orchestra and Chorus of the Metropolitan Opera House, Karl Böhm