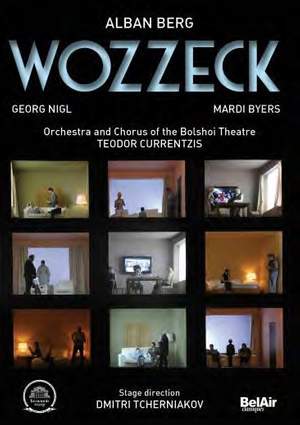 there's little doubt that much credit for this significant revival must be given to Teodor Currentzis, whsoe committed conducting inspires the Bolshoi Theatre Orchestra to deliver an urgent account... — BBC Music Magazine, February 2013, 3 out of 5 stars More…

In 2010, for the first time in its history, the Bolshoi Opera presented Alban Berg’s masterpiece 'Wozzeck'. Dmitri Tcherniakov’s truly historic production is now available in this DVD. The Russian director’s aim with this bold, sensitive transposition was “to highlight the hidden sorrows of a late 20th-century man dwelling in a megalopolis.” The redoubtably complex title role was entrusted to Austrian baritone Georg Nigl. Nigl studied with Kammersängerin Hilde Zadek. Over the last few years he has worked with, among others, Thomas Hengelbrock and his Baltasar Neumann Ensemble, Jordi Savall and his Hesperion XXI Ensemble, and Giovanni Antonini and Luca Pianca and their Il Giardino Armonico.

American soprano Mardi Byers plays Marie. A native of Colorado, she made her international debut as 'Tosca' in Lübeck and Elisabetta in 'Don Carlos' in Wiesbaden and Basel. She has also sung Donna Anna and Suor Angelica at the New York City Opera, as well as Elisabeth in 'Tannhäuser' and Ariadne. The Proms audience saw her in Mahler 8 in 2010 with Jiri Belohlavek.

Greek conductor Teodor Currentzis directs the Bolshoi Theatre Orchestra and Chorus. Artistic director of the Perm Opera and founder and musical director of the Musica Aeterna ensemble, Currentzis is now to be seen in the world’s leading venues: the Opéra de Paris, Opernhaus Zurich, Bayerische Staatsoper Munich, the Royal Opera House Covent Garden and the Teatro Real in Madrid.

there's little doubt that much credit for this significant revival must be given to Teodor Currentzis, whsoe committed conducting inspires the Bolshoi Theatre Orchestra to deliver an urgent account of the score...Tcherniakov has chosen to recast Wozzeck in a contemporary context, as a purely psychological drama exploring the inertia of life in the metropolis.

Everyone involved...knows exactly where they are going and gets there triumphantly...Nigl's carefully paced Wozzeck (far less 'expressionist' than we may be used to) and Byers's pitch-perfect everyday working woman of a Marie are ably supported...unless you cannot cope with the loss of an early-19th century period setting, this production will furnish the clearest possible expose of the Berg-Buchner drama.

Wozzeck on DVD is an extraordinary experience when one encounters well-directed singers who respond to the camera with the ease of film actors … Georg Nigl’s attractively light-timbred voice deals with this music so easily...[Byers] owns a youthfully lovely spinto instrument that can ‘float’ and let loose with equal ease … All in all a magnificent release