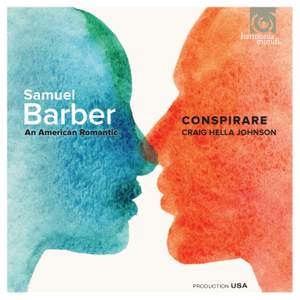 The 36 professional of the America choir Conspirare sing with good tuning and clear articulation, their voices beautifully blended in a warm acoustic...Craig Hella Johnson directs a sympathetic... — BBC Music Magazine, December 2012, 4 out of 5 stars More…

Barber: A Stopwatch and an Ordnance Map, Op. 15

I. Body of a woman

III. In the hot depth of this summer

VII. We have lost even this twilight

VIII. Tonight I can write

David listens to some great recordings of Samuel Barber, one of the finest American composers of the Twentieth Century.

Samuel Barber’s lyrical melodies and unabashed romanticism have earned him a cherished place in the pantheon of 20th-century composers. Recorded here are some of Barber’s finest works for choir (including the beloved 'Agnus Dei') alongside 2 world premières: a new version for chamber chorus and orchestra of Barber’s anguished work 'The Lovers' on poetry by Pablo Neruda, and a new version of 'Easter Chorale', which were both made by Robert Kyr for Craig Hella Johnson and Conspirare.

Conspirare’s critically acclaimed releases on the harmonia mundi label have earned copious praise. 'Threshold of Night' (2008) in particular, featured music by Tarik O’Regan and was nominated for Best Choral Performance and Best Classical Album at the Grammys.

The 36 professional of the America choir Conspirare sing with good tuning and clear articulation, their voices beautifully blended in a warm acoustic...Craig Hella Johnson directs a sympathetic performance, with a good team of step-out soloists, led by baritone David Farwig.

These are exemplary performances and Johnson represents every nuance of Barber's expression markings...Barber's choral output now has the attention it deserves.

The performance is a triumph, superbly well sung by Company Voices, a professional chamber choir that forms one part of the choral ensemble Conspirare.

Performances throughout the programme are exemplary, the recorded sound is excellent - I listened in conventional CD format - and the documentation, which is in English, French and German is first class and beautifully laid out. This is an important disc for all devotees of Samuel Barber’s music.