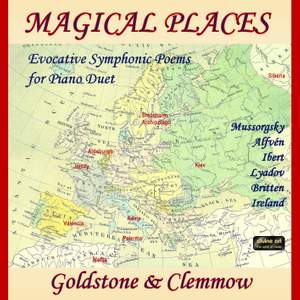 Of the six orchestral works on this recording three are in the composers’ own piano duet versions; two others were transcribed by people in whom the composers had great faith (Rimsky-Korsakov here being considered the composer of Night on Bald Mountain, as Mussorgsky had died), and it must be presumed that Lyadov approved the choice of Kalafati who “was held in great esteem by his colleagues and pupils” (Baker’s “Biographical Dictionary of Musicians”). Three of the six pieces of music involve the supernatural, while the remaining three present “magical” soundscapes in their different ways. The first two items depict very different midsummer festivities.

As a further note, four of the pieces featured on this CD are World Première Recordings. The CD booklet contains highly informative notes by Anthony Goldstone.

With CDs around forty in number and a busy concert schedule stretching back more than a quarter of a century, the British piano duo Goldstone and Clemmow is firmly established as a leading force.

Described by Gramophone as ‘a dazzling husband and wife team’, by International Record Review as ‘a British institution in the best sense of the word’, and by The Herald, Glasgow, as ‘the UK’s pre-eminent two-piano team’, internationally known artists Anthony Goldstone and Caroline Clemmow formed their duo in 1984 and married in 1989. Their extremely diverse activities in two-piano and piano-duet recitals and double concertos, taking in major festivals, have sent them all over the British Isles as well as to Europe, the Middle East and several times to the U.S.A., where they have received standing ovations and such press accolades as ‘revelations such as this are rare in the concert hall these days’ (Charleston Post and Courier). In their refreshingly presented concerts they mix famous masterpieces and fascinating rarities, which they frequently unearth themselves, into absorbing and hugely entertaining programmes; their numerous BBC broadcasts have often included first hearings of unjustly neglected works, and their equally enterprising and acclaimed commercial recordings include many world premières.