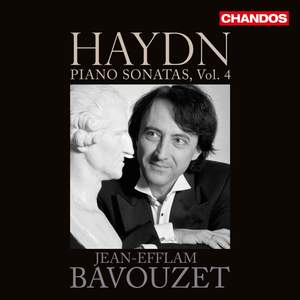 this is among the finest accounts [of the Variations] on disc: searchingly nuanced from moment to moment yet never losing its grip on the work's tragic progress. Bavouzet's readings of the three... — BBC Music Magazine, November 2012, 5 out of 5 stars More…

In the words of Bavouzet himself: ‘Each volume of this ambitious, extended project will arrive over the years like a postcard, dispatched during my travels with scant respect for chronological considerations, but undertaken with the greatest passion for trying to convey as vividly as possible to twenty-first-century ears the boundless treasures of this sublime music.’

He also notes: ‘We often forget how little information Haydn left us in the scores of his keyboard works: few indications of dynamics or of phrasing, and the briefest guides to tempo. This task is never anything other than absolutely fascinating, but for the performer it is also testing, and even risky. He must, even more than usual, create his own world, his own logic, left only to hope that, in the absence of tangible evidence, he will not distance himself too far from the composer’s intentions, which remain forever unknowable.’

this is among the finest accounts [of the Variations] on disc: searchingly nuanced from moment to moment yet never losing its grip on the work's tragic progress. Bavouzet's readings of the three selected Sonatas in this latest instalment of his ongoing series are all equally illuminating in different ways.

Quite apart from his stylistic command and sheer delight in the music, Bavouzet’s mixing and matching of different periods in the composer’s awe-inspiring pianistic development ensures there is never a dull moment.

Bavouzet doesn't disappoint [in the F minor Variations]...He leans towards passion, but melancholy also surfaces through rubato, embellished repeats, control of line, pace and dynamics...This is a performance of stature with not a trace of the slick superficiality that mars matters elsewhere.

With his Yamaha piano, Bavouzet’s crisp articulation — a constant delight — seeks to emulate the plucked action of the harpsichord, but he brings a singing legato line to Haydn’s melodies.

This continuing series is turning into a real classic: Jean-Efflam Bavouzet has an infectious sense of the witty fun that underlies so many of Haydn's inventions, and the finale of the D major Sonata No 30 fairly fizzes with joy. But the real discovery here is a new version of the wonderful, touching Variations in F minor.