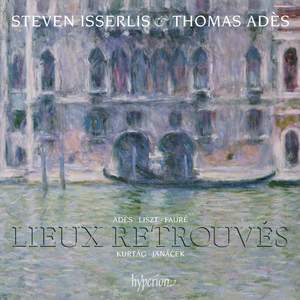 Match [Ades's playing] with the mellow sound and manner of Steven Isserlis's cello, and you have something very special. Their choice of repertory here - devised as an extended upbeat to Ades's... — BBC Music Magazine, December 2012, 5 out of 5 stars More…

A cello recital with a difference from two maverick geniuses, displaying the fecundity of their collaboration. The world-famous cellist Steven Isserlis, one of the best-loved instrumentalists of today, joins forces with composer and pianist Thomas Adès, described by the New York Times as one of the most imposing figures in contemporary music.

This recording opens with three of Liszt’s arrangements for cello and piano—the dark plangency of Isserlis’s tone emphasizing their elegiac power. Janácek’s Pohádka (‘A Tale’) is based on a story with many magical elements, and it is this particular quality which Isserlis and Adès bring out in their aerial performance. The passionate ecstasy of Fauré’s Cello Sonata No 2 is deeply felt, and the elemental mysterious sadness of Kurtág’s miniatures leads the listener into the 21st century and to the ‘title track’ of this disc which Adès wrote for Isserlis himself. Lieux retrouvés is a characteristically thrilling tour de force, displaying influences from all the composers previously featured and many more. The writing for the cello reaches uncharted levels of difficulty. Isserlis in his thoughtful booklet notes describes it in pictorial terms of rivers and mountains—here’s Anthony Tommasini, again in the New York Times: ‘The rippling figures for piano and cello spin out in crazed, cyclic riffs; the crystalline piano harmonies sound as if the wind were rustling the chimes in the pagoda; the feisty, industrialized propulsive bursts in the finale.’

Match [Ades's playing] with the mellow sound and manner of Steven Isserlis's cello, and you have something very special. Their choice of repertory here - devised as an extended upbeat to Ades's Lieux retrouves at the end of the programme - is unusual, memorable, and wonderfully performed from start to finish.

Isserlis plays with almost tangible intensity and soul, while Adès finds charm and natural expression at every turn – a true musical dialogue.

This blissfully unhackneyed and brilliantly executed recital takes memory in all its facets as its theme...the recording throughout gives the players all the space and atmosphere they need to characterise the varied moods and textures of an unusually rewarding programme.

Isserlis is furiously lyrical and concentrated [in the Adès], but no less so in the other works, which offer aptly Romantic-modern context for Adès’s inspiration.