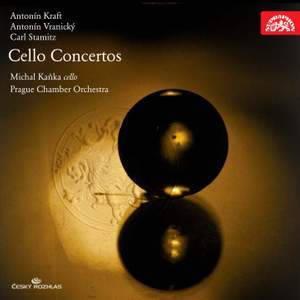 Carl STAMITZ - Cello Concerto No. 2 in A major - I Allegro con spirito

Czech roots and international careers are the connecting link between the creators of all the three featured concertos.

Antonín Kraft, first cellist in Prince Esterházy’s orchestra, was according to Haydn, who initiated him into the art of composition, “one of the most superb masters of this instrument”.

In Dresden, he performed together with Mozart, and his virtuosity was also esteemed by Beethoven (who wrote for Kraft the demanding cello part of his Triple Concerto). Like Kraft, Antonín Vranický too lived in Vienna, studied with Haydn and was a friend of Beethoven. A superlative violinist, he worked as Kappelmeister, concert master and composer in Prince Lobkowitz’s orchestra and is considered the founder of the Vienna Violin School. Carl Stamitz was born in Mannheim, where he played the violin in the celebrated court orchestra before spending years in Paris and London and undertaking solo concert tours throughout Europe (Vienna, Salzburg, Frankfurt, Amsterdam, etc.).

His music contains undertones of the Romantic sentimentality. Michal Kaňka, a member of the Pražák Quartet and soloist, the holder of numerous accolades (including from the ARD Munich Competition) and with award-winning recordings to his name, has breathed new life into the nearly forgotten concertos created by the three masters.