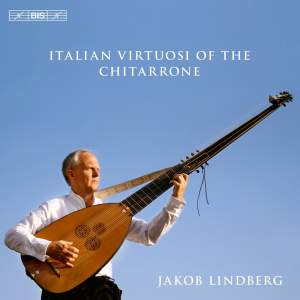 Italian Virtuosi of the Chitarrone

The chitarrone is one of the more spectacular instruments of the early baroque. The name probably means ‘large kithara’, after the instrument played by the Classical Greek poets, and it was first developed as a bass lute to accompany singing and recitative

Between 1604 and 1640, Giovanni Girolamo Kapsperger (also known as Johann Hieronymus Kapsberger), Alessandro Piccinini and Bellerofonte Castaldi published a number of collections of chitarrone music, from which Jakob Lindberg has chosen some favourite dances, arias, toccatas and passacaglias.

Combined into seven suites, they provide rich opportunity to enjoy the particular timbre and the special playing techniques of this instrument.

Jakob Lindberg has a long-standing interest in the many varieties of lutes and has now dedicated himself to researching their relative – research which informs both the performances and Lindberg’s own liner notes.