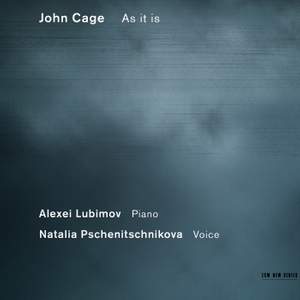 John Cage: As It Is

Those who consider John Cage to be the king of chaos, ruling over a world of disconnected, random events, may be surprised by this wonderful CD...The recording presents great clarity and detail... — BBC Music Magazine, January 2013, 5 out of 5 stars More…

Cage: The Unavailable Memory of

I. Twenty Years After

III. At East And Ingredients

Cage: She is Asleep

A fresh approach to one of contemporary composition’s most iconoclastic and inventive figures, ‘As It Is’ is issued to mark the 100th anniversary of the birth of John Cage. Early Cage is the subject here, strikingly original songs and piano pieces from the 1930s and 1940s. Songs in which Cage set words by writers whose vision was as independent as his own – James Joyce, Gertrude Stein, and e e cummings. They are performed by the Russian pianist Alexei Lubimov – who championed Cage’s work in Russia and later had a close working relationship with him – and his compatriot, vocalist Natalia Pschenitschnikova.

As Paul Griffiths writes, “The music exists in singing that has a raw, living edge, and it exists in piano tone that can be utterly simple and utterly remarkable. There is also a third presence, that of the producer, bringing forward the extraordinary resonances that come from Lubimov’s piano, with preparation or without.” With Manfred Eicher producing, the recording was made in December 2011 in Zürich. Lubimov grasps both the playfulness of the music and its message of freedom.

Lubimov previously included Cage’s In a Landscape on his 2002 debut recording for ECM New Series, Der Bote (461 8122), a disc of piano elegies. Among his other acclaimed recordings for the label are works by Scriabin, Stravinsky, Shostakovich, Schnittke, Arvo Pärt, and Valentin Silvestrov. Earlier this summer his double album of Debussy’s Preludes and other pieces (476 4735) attracted huge praise and was BBC Music Magazine’s ‘Recording of the Month’ in July. Natalia Pschenitschnikova has appeared on two previous ECM discs of Giya Kancheli as a flautist.

Those who consider John Cage to be the king of chaos, ruling over a world of disconnected, random events, may be surprised by this wonderful CD...The recording presents great clarity and detail although sometimes spacious acoustics create unnecessary grandeur. Altogether, this is a crucial collection.

another marvellously atmospheric and deeply involving release from ECM New Series which, in its exploration of John Cage’s opens up unexpected musical nuggets and provides context for his entire creative world

Nothing is generalised, and the performances by Lubimov and Pschenitschnikova take immense care over every nuance, without ever sacrificing any of the sense of the music's shape.

[Lubimov and Pschenitschnikova] have been performing his music since the time it outraged the Russian establishment in the '60s and '70s...The standout track...is "Dream" from 1948, a solo piano piece, which follows no overt narrative progression but drifts from note to note without ever sounding wilful or wrong.