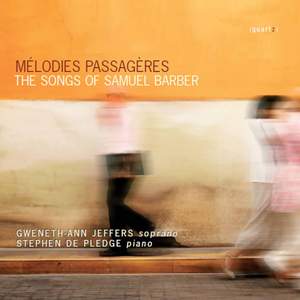 Samuel Barber’s parents had hoped he would follow his father into the medical profession, but his burgeoning musical ability soon took over. Barber himself had a fine baritone voice, studying singing as well as composition and piano. Throughout his career, Barber’s instinct for vocal shaping would influence his output, with half of his published compositions being vocal. Among the best of today’s young British singers, Gweneth-Ann Jeffers is noted for commanding voice and vivid personality. New Zealand pianist Stephen De Pledge is one of the most exciting and versatile musicians of his generation. His solo performances have taken him throughout the UK, including five solo recitals in the Wigmore Hall.

Jeffers catches each mood with poise and grace; solid accompaniments from de Pledge.

She is at her best in the witty and touching Hermit Songs...Jeffers gets the swing; her high note are impressive but at times in these performances there's too much vibrato.