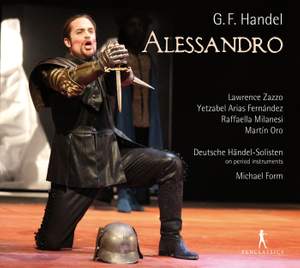 [Zazzo's] handling of the title-role, though sometimes underpowered, is expressive and technically secure...Fernandez is undoubtedly the star of the show. Her arias...are delivered with virtuosity. — BBC Music Magazine, November 2012, 3 out of 5 stars More…

Act I: A sprone, a fren leggiero (Live)

Handel’s opera 'Alessandro', first performed at the King’s Theatre, Haymarket in London on 5 May 1726, was one of the composer’s most successful works for the stage. This opera displays Handel at the pinnacle of his career and enjoyed repeated performances over a period of several years.

However, in modern times, 'Alessandro' has remained one of Handel’s least performed operas. Alexander’s heroic exploits only provide a background to the amorous dalliances, in which the eponymous hero cuts a pretty poor figure. Admittedly, the singer of the role is faced with eight arias in which he is forced to perform the most heroic deeds: the castrato Senesino was at this time the undisputed star of Handel’s operatic enterprise - a hard act to follow. There are, however, further aspects to explain this neglect. Faustina Bordoni gave her first ever, long-anticipated performance in London in the première of 'Alessandro'. She rapidly became Handel’s regular diva, Francesca Cuzzoni’s rival. The two singers were already familiar with each other from their time in Italy, where they had shared numerous operatic stages, but Handel, who was under permanent threat of bankruptcy, used the rivalry between the two singers in an ingenious advertising campaign. The cat-fight between the divas was substantially hyped up in the press as each singer attempted to outdo the other in progressively more dazzling ornamentation. This explains why 'Alessandro' is so seldom performed. Basically, this work demands the three best singers in the world. Once these exceptional talents have been assembled, the opera is transformed into a string of the most beautiful pearls, strung perhaps on a slightly shallow plot, which however retains a certain charm.

The present live recording, from the 2012 Handel Festival in Karlsruhe, can be viewed as a pioneering achievement and is only the second ever complete performance of Handel's 'Alessandro' since the recording by Sigiswald Kuijken and La Petite Bande in the mid-1980s.

With an outstanding cast: Lawrence Zazzo in the title role, Yetzabel Arias Fernández, Raffaella Milanesi and Martin Oro, the opera was the highlight of the Handel Festival, which was cheered equally by both the audience and the critics.

[Zazzo's] handling of the title-role, though sometimes underpowered, is expressive and technically secure...Fernandez is undoubtedly the star of the show. Her arias...are delivered with virtuosity.

from the first bars of the Overture it is obvious that the capable resident Baroque orchestra are no slouches: their accomplished strings often convey graceful shading...[Zazzo's] articulation of phrases is ideal for the abundance of lilting love arias; Raffaella Milanesi's sultry Lisaura is suitably distinct in timbre and personality from Yetzabel Arias Fernandez's dignified Rossane