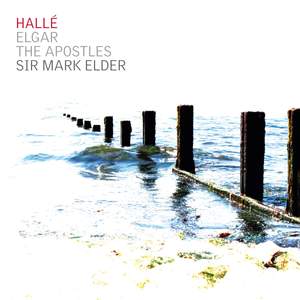 It has all the tension and excitement of live performance, rising to incandescence in the closing pages, and Mark Elder has perfect control of the large forces and dramatic pacing. Brindley Sherratt... — BBC Music Magazine, November 2012, 5 out of 5 stars More…

Part 1, Prologue: The Spirit of the Lord

Part 1, I. The Calling of the Apostles

Part 1, I. The Calling of the Apostles, The Dawn

Part 1, I. The Calling of the Apostles, "And when it was day"

Part 1, III. By the Sea of Galilee

Part 1, III. By the Sea of Galilee, In the Tower of Magdala

Part 1, III. By the Sea of Galilee, "This shall ye have of mine hand"

Part 1, III. By the Sea of Galilee, In Caesarea Philippi

Part 1, III. By the Sea of Galilee, In Capernaum

Part 1, III. By the Sea of Galilee, "Turn you to the stronghold"

Part 2, IV. The Betrayal, "Then gathered the Chief Priests and Pharisees"

Part 2, IV. The Betrayal, In Gethsemane

Part 2, IV. The Betrayal, "Then Judas, which had betrayed Him"

Part 2, VI. At the Sepulchre

Part 2, VII. The Ascension, "And when He had spoken these things"

Part 2, VII. The Ascension, "They platted a crown of thorns"

This new release presents the oratorio planned to open the trilogy, the lesser known and hitherto rather under-served work The Apostles , in a performance which the Guardian described as being ‘revelatory’. This retelling of Christ's Passion from the viewpoint of His followers features extensive and effective use of and choral writing which is arguably an advance on that of Gerontius with the work’s closing section – depicting Christ’s Ascension to heaven – thought to be one of the most poignant ever written.

The performance benefits from extensive research by Mark Elder, including study of a proof copy of the vocal score which he matched with what Elgar himself conducted in 1921, reinstating the semichorus of nine male voices, sung here by an ensemble Elder specially selected from the Royal Northern College of Music.

The recording is probably the first since Elgar conducted The Apostles in Hereford on 7 September 1921, at the Three Choirs Festival, to incorporate Elgar’s intentions at several points in the oratorio Elgar included a part for a shofar, an ancient Hebrew instrument made of ram’s horn. In most performances this is imitated by modern instruments, but for this recording Sir Mark Elder features a genuine shofar player.

It has all the tension and excitement of live performance, rising to incandescence in the closing pages, and Mark Elder has perfect control of the large forces and dramatic pacing. Brindley Sherratt is an affecting, dark-voiced haunted Judas, Jacques Imbrailo an authoritative Jesus...I'm inclined to rate this new Halle version the most nearly definitely Apostles yet.

The musical idiom is home territory for Mark Elder and the Hallé...The choruses sound magnificent, but Elder has a tendency to stretch the slow music and over-egg the climaxes, bringing out the bombastic side of Elgar.

not only does Elder obtain playing and singing of the utmost accomplishment and sensitivity, his hugely penetrating interpretation evinces an idiomatic pliancy, sure dramatic instinct and iron grip...Coote makes a memorably involving Mary Magdalene while Brindley Sherratt shines in a deeply sympathetic portrayal of Judas...A set absolutely not to be missed.

All six of the soloists...are outstanding...The Halle Choir is splendid throughout, firm and incisive in attack, and splendidly recorded...The Halle Orchestra players seem to be Elgarians to a man or woman...It is typical of the thoroughness with which this Halle version has been prepared that it should...trump the hand of its few but still worthy predecessors, and qualify as the new Apostles of choice.

Elder’s Hallé choirs sing splendidly. They’re most attentive to Elgar’s many instructions regarding dynamics, the words are clear and the choral tone is always well focused...At the end of the day the triumph is Mark Elder’s...Elder is convincing throughout and in every respect. Both Boult and Hickox offer insightful interpretations but neither trump Elder...this superb Apostles is a mandatory purchase for all Elgar enthusiasts

An undoubted highlight of Sir Mark Elder's tenure of the Hallé has been his series of Elgar recordings, and this account of The Apostles is surely one of the best. A magnificent cast...and there is plenty of impressively enthusiastic singing from the Hallé Choir.

It's hard to believe that this detailed account was sourced from a concert – there is very little extraneous noise, while the placing of the soloists, the three choruses and the off-stage shofar seems perfectly natural...Elder's performance has shown that, though the narrative thread is sometimes quite weak, the best of the score is top-quality Elgar.