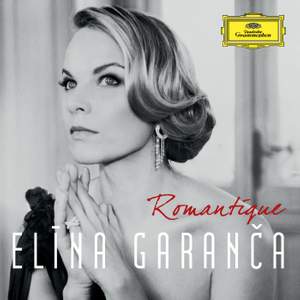 She describes herself as a lyric mezzo, but many roles here suggest considerable power, emphasised by the echoey recording...Her French isn't perfect, but it's very good, and she relishes the... — BBC Music Magazine, January 2013, 4 out of 5 stars More…

Tchaikovsky: The Maid Of Orléans / Act I

"Farewell You Native Hills and Fields"

In Romantique, Elīna Garanča makes a smashing return to the studio and puts her imprint upon the big Romantic repertory, brilliantly portraying such different heroines as Tchaikovsky’s Joan of Arc (The Maid of Orléans), Gounod’s Sapho and Saint-Saëns’ Dalila

Elīna Garanča’s mezzo-soprano is velvet; she is a stunning figure on stage; her formidable technique encompasses repertoire from Mozart and bel canto to dramatic roles and contemporary music

Conductor Yves Abel’s penchant for the voice and skill at leading an orchestra draws beautiful sound and potent drama from the Filarmonica del Teatro Comunale di Bologna. Elīna Garanča’s rapport with this orchestra is deeper than ever.

She describes herself as a lyric mezzo, but many roles here suggest considerable power, emphasised by the echoey recording...Her French isn't perfect, but it's very good, and she relishes the lyrical lines of Gounod's little-known Sapho and Queen of Sheba...A fine collection.

Marguerite's soliloquy, accompanied by an eloquent cor anglais, is movingly done...[as Dalila] Garanca is sensuous without being vampish - quite an achievement in this part...[She] moves effortlessly from top to bottom without ever sacrificing beauty of tone...Fans - and others - need not hesitate.

She has an intensely lyrical voice, lithe enough for ornamentation but also honing a dusky quality which is immediately appealing in the repertoire selected for this disc...Overall, this is a splendid operatic recital...[and] should appeal to aficionados of fine singing, especially in French repertoire somewhat 'off the beaten track'.

If we needed more evidence that the Latvian mezzo is shaping up to be one of the 21st century’s greatest voices, this superb album of 19th-century arias supplies it in buckets. From top to bottom her timbre is rich and firm and her intonation virtually infallible...Pure vocal bliss.