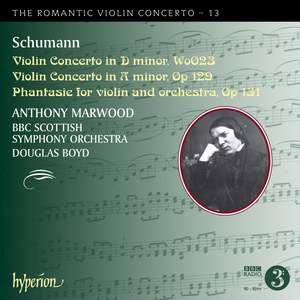 Marwood's tone is notably characteristically focused with a notable sweetness which is matched by Wallin...Boyd and his Scottish players set ideal tempi in outer movements, enabling Marwood to... — Gramophone Magazine, November 2012 More…

Schumann: Violin Concerto in A minor, Op. 129 (arranged from the Cello Concerto)

Hyperion is pleased to present a thirteenth volume of the Romantic Violin Concerto. Although frequently featuring virtuoso showpieces by the composer–violinists of the nineteenth century, this series also includes works of great musical interest which for one reason or another have not entered the repertoire. The performance history of all three pieces recorded here is indissolubly linked with the turmoil of Schumann’s last years.

Schumann’s Violin Concerto in D minor had to wait till 1937 for its premiere and has never become a standard work, but in the hands of Anthony Marwood it sounds remarkable. The Phantasie, by contrast, was lauded at its premiere and performed a number of times by Joachim. The Violin Concerto in A minor was arranged by Schumann from his Cello Concerto of the same opus number and is an important work in its own right.

Marwood’s great technique and thoughtful musicianship have made him increasingly an artist to notice, and he performs frequently in Australia and America as well as throughout Europe. Here he is accompanied by Hyperion’s ‘house band’, the BBC Scottish Symphony Orchestra, under the baton of Douglas Boyd.

Marwood's tone is notably characteristically focused with a notable sweetness which is matched by Wallin...Boyd and his Scottish players set ideal tempi in outer movements, enabling Marwood to negotiate fearlessly the fairly awkward and largely middle-range-lying solo writing...Utterly winning and authoritative.

[Marwood's] tone is sweetly centred, and avoids excessive contrasts between the upper and lower strings, so equalisation is the name of the game. So, too, is a certain chamber-scaled approach, with give-and-take with the orchestral wind principals...Marwood and Douglas Boyd keep the music on the go and bring out its felicitous colour

There's little Marwood can do to disguise the shortcomings of the solo writing [of the D minor concerto], or the repetitions of the finale, but he and the BBC Scottish Symphony under Douglas Boyd go at it with a great deal of enthusiasm, with the solo line very prominent in the sound picture.

in a performance as strong and imaginative as this one by Anthony Marwood its impact is considerable. The sinew of the first movement, with its bold opening statement and toughness of inner workings, is contrasted with the mellow, reflective lyricism of the central slow one...There are firm Schumann fingerprints all over the score, and it fully merits the passionate advocacy that it receives here