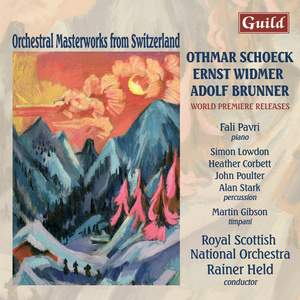 In Schoeck's hands it's full-blooded fun and done in the grand manner by the RSNO and the Swiss conductor for the sessions. — Gramophone Magazine, August 2014

Brunner: Partita for piano and orchestra

This CD, with four world premiere releases, offers a representative slice of 20th-century Swiss music, ranging from Othmar Schoeck’s late-Romanticism via the neoclassicism of Adolf Brunner to the Modernism of Ernst Widmer. Nearly fifty years separate Schoeck’s first and last major orchestral works, recorded here – but his commitment to the German Romantic tradition remains undimmed. Brunner’s neoclassical Partita betrays the influence of Hindemith, but has a Brahmsian meatiness to its piano part, while Widmer’s influences in his exuberant concerto range from Bartók to Brazilian street music.

In Schoeck's hands it's full-blooded fun and done in the grand manner by the RSNO and the Swiss conductor for the sessions.