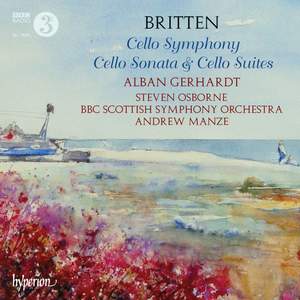 This is the fastest version of Britten's Cello Symphony on record. From the opening chords there's a brisk vigour to Alban Gerhardt's approach that marks it out as distinctive. He seems hell-bent... — BBC Music Magazine, February 2013, 4 out of 5 stars More…

A major release at the start of Britten’s anniversary celebrations. Britten’s long friendship with cellist Mstislav Rostropovich was one of the most inspiring and fruitful musical collaborations in history. It led directly to the composition of some of the most important works for cello of the twentieth century.

Alban Gerhardt, among the greatest living exponents of the instrument, performs this body of works in its entirety. In the Cello Sonata he is partnered by Steven Osborne, whose Hyperion recording of Britten’s Piano Concerto received a Gramophone Award. The BBC Scottish Symphony Orchestra and Andrew Manze join Gerhardt for the Cello Symphony, Britten’s only substantial piece of absolute symphonic music.

The astonishing music for solo cello—the three suites plus the miniature Tema ‘Sacher’—completes the set. The suites are repositories of a huge number of compositional and string-playing techniques, acknowledging their debt to Bach but also demonstrating all the imagination and emotional scope for which the composer is revered.

This is the fastest version of Britten's Cello Symphony on record. From the opening chords there's a brisk vigour to Alban Gerhardt's approach that marks it out as distinctive. He seems hell-bent on grasping this sometimes awkward and ungainly beast by the scruff of its neck and finding something new in its gruff exchanges...Last but not least his reading of Britten's Sonata with Steven Osborne is utterly thrilling. A must-have set for all Britten enthusiasts.

[Gerhardt] has a cool-headed precision Britten would probably have admired...Given Gerhardt's fine Britten credentials, this makes a recommendable package: performances are well judged, with clean-cut rhythms and good attention to detail.

Gerhardt makes one of the strongest cases for [the Cello Symphony] on disc since the composer’s own recording with the cellist. While his partnership with Osborne in the Sonata ...sparkles, he truly comes into his own in the solo suites, the most personal music here, inspired by the keynote works of Bach.

This poetic, virtuosic player makes a powerful case for the three unaccompanied Cello Suites on the second disc. There's no shortage of recordings of these suites...but this is as good as any.

Strongly and sensitively partnered by Steven Osborne, Gerhardt gives a wonderfully vital performance of the Cello Sonata, alert to the cunning interplay between the two instruments...[in the Suites] Gerhardt’s playing is supple, richly coloured and articulated with the utmost finesse...These performances demonstrate a mature affinity with Britten’s highly personal style