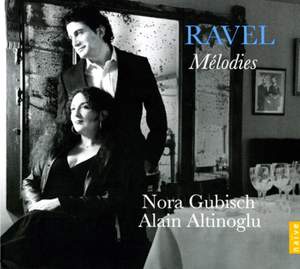 [Gubisch] combines a beautiful voice with intelligence, crisp diction and a real sense of style...I would guess she's lived with this music for a long time...this is a disc from which young and... — BBC Music Magazine, Christmas 2012, 5 out of 5 stars More…

No. 4. Le martin-pecheur (The Kingfisher)

The mélodies presented here were written between 1903 and 1927. They display in exemplary fashion the different facets of the art of Ravelian song. Some malcontents have declared them 'unclassifiable'. In fact, what is striking here is the diversity, the eclecticism, the independence of the composer when he chooses, as encounters and opportunities crop up, to illustrate a poem by Verlaine, to set to music the prose of Jules Renard, or to harmonise a Greek or Hebrew tune.

This footloose stroll through different times and cultures gives us an insight into the composer's inquiring mind, his determination to follow his wishes and desires, without noisily drawing attention to himself, yet tranquilly standing his ground in his personal world while apparently indifferent to the scandals he quite involuntarily provoked. The song texts reflect Ravel's literary culture, his interest in and respect for literature, which had been as Integral a part of his life as music ever since his adolescence, when, in the company of Ricardo Vines (great-great-uncle of Nora Gubisch), he frequented the bookshops and the second-hand booksellers along the Seine.

After musical studies at the Radio France Maîtrise and piano study with Catherine Collard, mezzo-soprano Nora Gubisch was awarded first prize for singing at the Paris Conservatoire, going on to study with Vera Rózsa, who became her principal teacher and mentor. She quickly earned leading rôles with the Paris Opéra, La Scala, Milan, San Francisco Opera, Salzburg, Aix-en-Provence and the BBC Proms. She has been a guest of the Vienna, New York and Munich Philharmonic Orchestras, Dresden Staatskapelle, Orchestre de Paris and London Symphony Orchestra, with conductors including Sir Colin Davis, Lorin Maazel, Georges Prêtre and Nikolaus Harnoncourt. She has formed a duo with pianist and conductor, Alain Altinoglu, now her husband, and has recorded many songs.

[Gubisch] combines a beautiful voice with intelligence, crisp diction and a real sense of style...I would guess she's lived with this music for a long time...this is a disc from which young and even less young singers can learn a great deal. 'Aoua!', the central song of the Chansons madecasses, is truly terrifying, as it ought to be.

It is a long, long time since anyone delved into Ravel’s songs as persuasively as Gubisch and her regular accompanist. The French mezzo-soprano has a full, voluptuous voice, but the key to her artistry lies in the idiomatic touch she brings to the music, based on her understanding of the texts and the difference it makes to the musical line...An outstanding recital.

Altinoglu exploits the colours and textures with the utmost eloquence … Gubisch, with a vocal timbre of mellifluous beauty and well-focused richness, responds with the striking malleable spectrum of sensibility to the varied scenarios that Ravel encapsulates.

One of the many attractions of this lovely disc is the exceptionally thoughtful booklet essay by Nina Vines … The recording is very fine and natural, with excellent balance … as fine a performance as I have ever heard … The individual songs are splendid

A satisfying collection of songs with piano accompaniment from mezzo-soprano Nora Gubisch and pianist Alain Altinoglu. As well as delightful accounts of works such as Deux mélodies hébraïques and Trois chansons madécasses, they also treat us to a characterful performance of the Histoires naturelles, and other rarities.

Not since the incomparable Régine Crespin...has a female French singer brought such insights and vocal allure to her native song repertoire as Nora Gubisch...Her voice remains youthful and bright, but capable of producing a wide spectrum of timbres for the very different demands of this challenging Ravel programme...The Kaddish can surely have never been more moving than it sounds on this fabulous disc.

Ravel effected an understated formal revolution in vocal music, the pieces performed here by mezzo-soprano Nora Gubisch with pianist Alain Altinoglu being notable for their commitment to textual interpretation rather than sheer operatic grandeur.