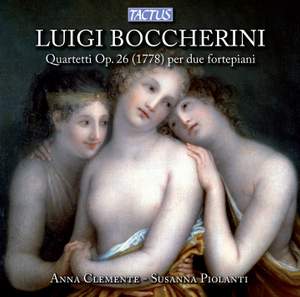 These transcriptions for two keyboards of Boccherini’s six Quartets opus 26 are performed on fortepianos by Anna Clemente and Susanna Piolant. The instruments used in the recording are originals made by Johann Schanz in the early 19th century.

Luigi Boccherini’s Quartets op. 26, composed in 1778, were transcribed for two harpsichords by an anonymous author at the end of the 18th century. The practice of twoplayer keyboard performance (with four hands on the same instrument, or two performers on two separate harpsichords or fortepianos) was widespread. Musical amateurs enjoyed reproducing at home the music they had appreciated in theatres or concert halls, and it is known that during those years keyboard instruments - the German word Klavier, in particular, denoted not only the harpsichord, but also the new piano and the clavichord - were the favourite instruments of Hausmusik. The Quartets are played here on two original Johann Schanz fortepianos, one dating from approximately 1810-1815, the other from around 1800.