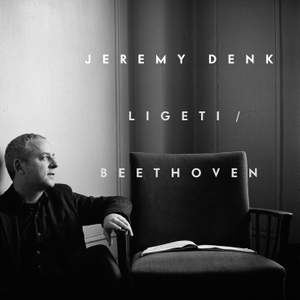 Honesty and a rounded humanity define these performances, rather than a strenuous striving for the infinite. Denk makes Ligeti's En suspens, an exercise in jazzy rubato, more tender and touching... — BBC Music Magazine, August 2012, More…

Nonesuch releases the label debut from acclaimed pianist Jeremy Denk, Ligeti/Beethoven, on May 14, 2012. The solo recording features Ligeti's Piano Études, Books One and Two, which Denk memorably performed in a series of recitals in 2011. The New York Times said his reading of the works left "audience members grasping for superlatives at intermission." The sets of études, six from Book One and seven from Book Two, bookend Denk's recording of Beethoven's Sonata No. 32 in C Minor, Op. 111, on the album. The Times said of Denk's 2010 Mostly Mozart Festival performance of the work: "This account, alive to every suggestion and nuance in the score, was an absolute joy to witness. Mr. Denk, clearly, is a pianist you want to hear no matter what he performs, in whatever combination-both for his penetrating intellectual engagement with the music and for the generosity of his playing."

In his Ligeti/Beethoven liner note, Denk explains his reasons for recording these works together: "One curious connection...is the way both Ligeti and Beethoven relate themselves to jazz (and to syncopation, rhythmic dislocation generally). Many people get disturbed, or confused, by Beethoven's anachronistic boogie-woogie; but I can't help thinking that however unlikely, this is an outgrowth, too, of ecstasies latent in the holy theme. There is a sense of ecstasy, too, in the discombobulations of Ligeti...

"But the most significant connection for me is between Beethoven's vast timeless canvas and Ligeti's bite-sized bits of infinity. Almost every étude visits the infinite; Ligeti uses it almost as a kind of cadence, a reference point. From simplicity, he ranges into unimaginable complexity; he wanders to the quietest and loudest extremes; he veers off the top and bottom of the keyboard. Always the infinite is lurking around, reminding you that it's not impossible, that it exists. I think of the way, among other things, Beethoven drifts off at the end of the Arietta, the way he indicates ending without ending, implies an infinite space of silence surrounding the work."

Jeremy Denk has steadily built a reputation as one of today's most compelling and persuasive pianists with an unusually broad repertoire. He has appeared as soloist with many major orchestras, including the Atlanta, Dallas, Houston, New World, St. Louis, and San Francisco symphonies, The Philadelphia Orchestra, Orchestra of St. Luke's, Orpheus Chamber Orchestra, and Philharmonia Orchestra in London. He appears often in recital in New York, Washington, Boston, and Philadelphia. Denk maintains working relationships with a number of living composers and has participated in many premieres. Denk's recording of music by Charles Ives, released on his own Think Denk Media label, made many Best of 2010 lists, including those of the New York Times, Boston Globe, Washington Post, and New York magazine. He also is an avid chamber musician and a respected writer, both on his blog and in such publications as the New Yorker.

Honesty and a rounded humanity define these performances, rather than a strenuous striving for the infinite. Denk makes Ligeti's En suspens, an exercise in jazzy rubato, more tender and touching than any other performances I've heard. And the opening of Beethoven's great Sonata has a noble understatement which is more affecting than grandiloquent...In all, it's a marvel.

Denk boasts impressive rhythmic vitality throughout 'Touches bloques'...Jaded listeners who've sat through umpteen Beethoven Op. 111 recordings will (hopefully) convinced how Denk will not linger over freer passages yet, within them, strategically and specifically lean on a specific note.

Ligeti's Piano Études are famously quixotic in pushing the player beyond their usual limits...But amongst the more extreme strategies are moments of great beauty...notable here for the way Jeremy Denk continues playing virtually beyond the point of audibility...He's ingeniously programmed amidst Ligeti's Études a reading of Beethoven's final Piano Sonata, in which order and chaos are as precipitously balanced as in Ligeti.

The Ligeti is crisp, nuanced and technically flawless, the Beethoven beautifully shaped and flexible. As Denk writes in the CD notes, he is fascinated by "Beethoven's vast timeless canvas and Ligeti's bite-sized bits of infinity". That fascination is illuminated in every bar he plays.