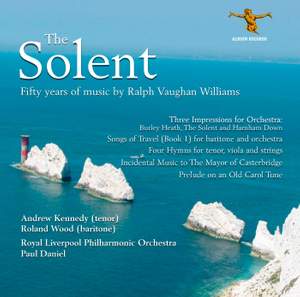 Clearly impressed by the Three Impressions, the RLPO and Paul Daniel perform them excellently, and the other items also. — BBC Music Magazine, December 2013, 4 out of 5 stars More…

Vaughan Williams: The Mayor of Casterbridge

Vaughan Williams was just thirty when he composed The Solent in 1902 and eighty when he completed the Prelude on an Old Carol Tune in 1952. Over this astonishing period, a time of two World Wars and unprecedented social, economic and political change, Vaughan Williams’ music remained broadly consistent. What was remarkable, however, was the consistency of style – from the visionary melody that opens The Solent to the richly harmonised setting of the carol On Christmas Night the Joy-Bells Ring of 1952 – the music is recognisably Vaughan Williams.

The span of music presented here demonstrates two other elements of Vaughan Williams’ character. The first is his depth of literary understanding; the second element was his knowledge and love of the English countryside. He knew the New Forest well and often took holidays in the Salisbury area, near to Harnham Down and The Solent. The Three Impressions for Orchestra is recorded here for the first time as a world première recording.

Vaughan Williams was delighted when he was approached by the BBC to write incidental music for a new radio serial of The Mayor of Casterbridge to be broadcast on each Sunday for ten weeks starting 7 January, 1951 and finishing on 11 March, 1951. The script was by Desmond Hawkins (1908-99). Desmond Hawkins put it this way shortly before his death: ‘Of the Hardy plays I dramatized, The Mayor of Casterbridge was probably the outstanding success. It is, of course, superb material to re-create in dramatic form….To heighten the action we wanted especially composed music: the composer whose name sprang immediately to our minds was Vaughan Williams. The idea appealed to him and he wrote for us a magnificent score…’ The Mayor of Casterbridge recorded here is also a world première recording.

Clearly impressed by the Three Impressions, the RLPO and Paul Daniel perform them excellently, and the other items also.

A tremendously rewarding and consistently absorbing compendium, this, flawlessly performed under Paul Daniel's idiomatic direction, and beautifully engineered to boot. A mandatory acquisition for all RVW acolytes.