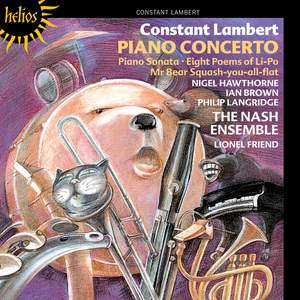 I. A summer day

III. With a man of leisure

V. The ruin of the Ku-Su palace

VII. On the city street

A fascinating selection of pieces by one of the twentieth century’s most original and perplexing figures. Constant Lambert is perhaps better known today for his strident views on his contemporaries, but was also as a composer of delightful, anarchic music, influenced particularly by Stravinsky and Ravel. A distinguished line-up of performers presents these works in the clearest light. This recording is a must for anyone interested in twentieth-century music. Many of Lambert’s other works are also available on Hyperion.

This reissue of recordings from 1994 affords a convenient distillation of Lambert’s genius...The Sonata and Concerto are wonderfully invigorating, inventive essays, tinged with a melancholy Lambert nicely evoked as “that four-in-the-morning feeling”. The Concerto stands with Falla’s harpsichord work among the great keyboard chamber concertos.

Make haste to this collection. It’s a cracker