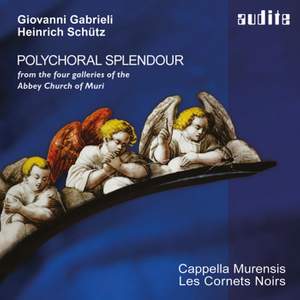 from the four galleries of the Abbey Church of Muri

The young Heinrich Schütz’s four-year sojourn with Giovanni Gabrieli proved to be one of the most fruitful educational journeys to Italy undertaken by a German musician. Following his return, Schütz presented his 'Psalms of David' in 1619: an impressive result of his encounter with the Italian musical style. These 'German Psalms in the Italian Manner' are consistently based on the polychoral style with which Schütz had become acquainted in the Venetian tradition of cori spezzati. As first organist of St Mark’s, Venice, Gabrieli included in his compositions the architecture of this ecclesiastical building in a unique way, placing the singers and instrumentalists, who were divided into as many as four choirs, in facing galleries, thus achieving remarkable sonic and spatial effects.

On this recording the Cappella Murensis and the ensemble Les Cornets Noirs make use of the four galleries in the Abbey Church at Muri where the abbots and master builders designed the octagonal nave of specifically for polyphonic effect. In the works for two, three and four choirs, voices and instruments blend with a total of four continuo organs, producing a unique sound. The inclusion of the two large historic Bossart organs (Epistle and Gospel) as continuo instruments creates an additional dynamic palette.

With magnificent Sonatas and Canzonas by Giovanni Gabrieli, Les Cornets Noirs, led by the cornettists Gebhard David and Bork-Frithjof Smith, are showcased as one of the leading European ensembles in early baroque music.