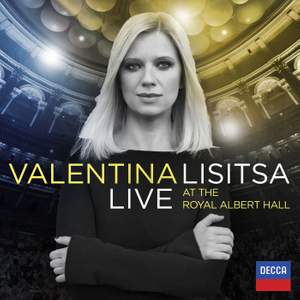 Lisitsa emerges as a hugely confident and spontaneous performer. There's grace in her turns of phrase and relish in her sense of rhetoric...Sometimes, though, a downside appears when loud passages... — BBC Music Magazine, December 2012, 3 out of 5 stars More…

No.2 in B Flat Major

No.12 in G Sharp Minor: Allegro

Born in Kiev, Ukraine, Valentina began playing the piano at the age of three and performed her first solo recital just one year later. She has won prestigious awards for her playing internationally, including the Murray Dranoff Two Piano Competition (together with her husband Alexei Kuznetsoff).

Valentina Lisitsa has already performed at major international venues including Carnegie Hall and Avery Fisher Hall in New York and the Vienna Musikverein, and in countries as far apart as the Netherlands and Brazil. She has played with renowned orchestras including Chicago Symphony, Seattle Symphony, San Francisco Symphony and the Pittsburgh Symphony, collaborating with conductors Manfred Honeck, Yannick Nézet-Séguin, and Jukka-Pekka Saraste, among others. Upcoming performances are confirmed with the Rotterdam Philharmonic, Philharmonie im Gasteig, Munich with Münchner Symphoniker and recitals at the Victoria Hall in Geneva and Philharmonie in Berlin.

With more than 43 million views and over 52,000 subscribers to her YouTube channel, the young pianist is not only one of the fastest-rising stars of the international concert scene but probably the single most-watched classical musician, having rapidly overtaken long-established giants of the piano world in terms of global online viewing figures.

Lisitsa emerges as a hugely confident and spontaneous performer. There's grace in her turns of phrase and relish in her sense of rhetoric...Sometimes, though, a downside appears when loud passages threaten to career a tad out of control and miss their point.

there's an admirable lightness of touch and appreciation of rhythmic flow to her "Für Elise", and her negotiation of Liszt's "Un Sospiro" is captivating.

This recital disc of short piano pops proves Lisitsa's technical skill rather than the potential depth or reach of her musicality. She opens, in reckless mood, with Rachmaninov's Prelude in G Minor, then settles into an elegant Für Elise

genuine gifts for lyricism and dazzling display...those musical gifts quickly hit the ears on this closely recorded CD.... Track three is Liszt’s La campanella, intelligently shaped, its bell sounds glittering as rarely before...Lisitsa tends to play with the lights fully on, with not enough shading in the wide expanse between loud and quiet. This gets rather tiring...But at the moment there is only one Valentina Lisitsa.