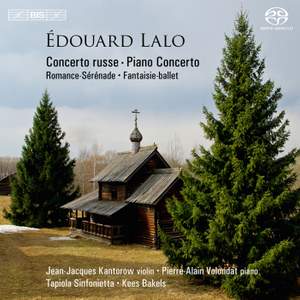 Four of the five works show off Kantorow's transcendent virtuosity, but the finest is the 1888 Piano Concerto, well interpreted by Volondat. — BBC Music Magazine, October 2012, 4 out of 5 stars More…

Lalo: Romance-Sérénade for violin and orchestra

Lalo: Fantaisie-ballet for violin and orchestra

Jean-Jacques Kantorow follows his critically acclaimed recording of music by Édouard Lalo with a second disc featuring two further works that were originally intended for Sarasate, the brief Fantaisie-ballet on themes from Lalo’s ballet Namouna, and the large-scale Concerto russe.

The disc closes with the Piano Concerto from 1888 – the composer’s final major work, played by Pierre-Alain Volondat.

Four of the five works show off Kantorow's transcendent virtuosity, but the finest is the 1888 Piano Concerto, well interpreted by Volondat.

The Piano Concerto...could hardly be played with greater assurance and affection than by Volondat...Kantorow's brilliance evokes memories of Sarasate himself. The recordings are exemplary in sound and balance.

Edouard Lalo's music is rarely played now, so this album is a welcome addition to his discography...Pierre-Alain Volondat is the heavyweight soloist in the Piano Concerto, Kees Bakels the energetic conductor.