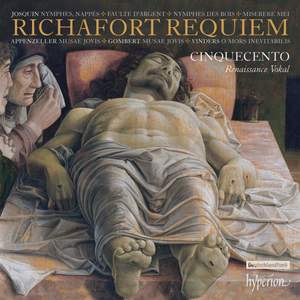 This release presents music associated with the Renaissance master Josquin Des Prez, a composer who towers above all others in the first part of the sixteenth century. Numerous works were attributed to him that have now been proven to be by his contemporaries and successors, including the central work on this recording, Jean Richafort’s expansive and beautiful Requiem. It is performed with affecting clarity by the all-male vocal group Cinquecento, whose many previous discs of Renaissance repertoire for Hyperion have garnered the highest critical praise.

Booklet notes by Stephen Rice, an acknowledged authority on this repertoire, place the music in its historical context and unpick the mysteries of its composition.

Cinquecento captures the work's meditative quality to profound effect, the all-male vocal ensemble creating an aptly plangent sonority and a tone of high seriousness. Using just six singers, one to a part, allows for lucid, detailed textures and chamber-music intimacy, yet, by exploiting their chest voices and the acoustic's natural reverberence, the group can also produce all the opulence and bloom of a much larger ensemble.

their sound has a magic of its own...this ought to win Cinquecento new supporters

the balance is perfect and the medloci lines are absolutely clear, so that every detail of Richafort's remarkable contrapuntal writing can be heard...If I could nominate this recording as 'Outstanding' twice over, I would do so, for I have run out of superlatives. It is, quite simply, sublime.

A sense of intricacy, of allusive layers within layers in the work, is constantly present in Richafort's homage. Cinquecento preface their rather austere performance with the two source works, and follow it with a group of laments from the years after Josquin's death...It's a thoughtfully planned collection, which repays very careful attention.