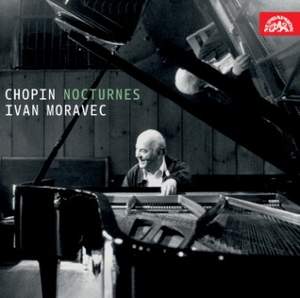 The sound quality is startlingly good, capturing all the richness, warmth and immediacy of the two instruments..Then there’s the surely peerless singing quality of Moravec’s playing. It allows... — Sunday Times, 24th June 2012 More…

One of the first recordings that earned Ivan Moravec acclaim and secured him a position among the finest pianists of the 20th century was the album of the complete Chopin Nocturnes made in 1965 in New York (Steinway) and at Vienna’s Konzerthaus (Bösendorfer) for the Connoisseur Society label. Many critics have branded this recording a benchmark and consider it the ultimate account of the Nocturnes; in the words of Henry Fogel (Fanfare): “This is playing that draws the listener deeply into the music - you are not drawn into Moravec’s achievement, but Chopin’s.” Ivan Moravec presents the Nocturnes in an admirable scale of colours and dynamics (down to astonishingly tender, barely touched tones), with the music flowing so naturally that it seems as though there are no bars or individual notes. Supraphon is rereleasing this legendary recording with a sensitively remastered sound, which brings out to the full the wealth of tone colours of Moravec’s piano.

The sound quality is startlingly good, capturing all the richness, warmth and immediacy of the two instruments..Then there’s the surely peerless singing quality of Moravec’s playing. It allows every piece simply and affectingly to weave its hypnotic, sweetly sad magic.