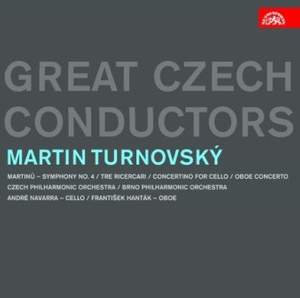 A Czech conductor who excelled worldwide. Martin Turnovsky recordings for the first time on CD.

Paradoxically, a greater opportunity to witness the artistry of the remarkable Czech conductor Martin Turnovsky, whose teachers included Karel Ančerl and George Szell, has been afforded to audiences abroad.

After winning the international conducting competition in Besancon (1958), he had to wait almost a decade for the real launch of his international career, since the totalitarian regime in Czechoslovakia prevented him from travelling around the world.

He was chief conductor of the Dresdner Staatskapelle and Staatsoper, and, after emigrating to the West at the end of the 1960s, led the Operas in Oslo and Bonn, guest-conducted the New York Philharmonic, the Bavarian Radio Symphony Orchestra, the Royal Liverpool Philharmonic and other major orchestras. Only after the regime change in Czechoslovakia in 1989 could he renew his work with orchestras on home soil. In the 1960s he made numerous recordings for Supraphon. The majority of those presented on these discs are now available on CD for the first time. They bear witness to Turnovsky’s distinct talent, which several years later would dazzle to the full in front of the world’s most renowned orchestras.