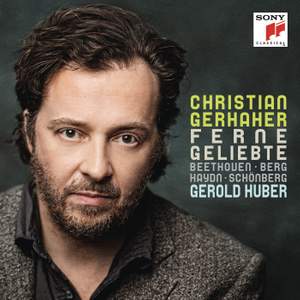 a recital of rare and compelling musical intelligence and integrity of response...But as well as the intellectual satisfaction of this recital, there is also the sheer delight of Gerhaher's superbly... — BBC Music Magazine, September 2012, 5 out of 5 stars More…

Christian Gerhaher is the outstanding Lieder singer of our time. His recordings of the art songs and song cycles by Schubert, Schumann, Brahms and Mahler possess reference status, and have been awarded many major prizes. In the UK alone his awards include the 2009 BBC Music Magazine Award for Vocal Performance, a Gramophone award in 2006, and in 2011 he won the Olivier Outstanding Achievement in Opera award.

Gerhaher now presents his first ‘concept album’, which is at the same time his first album of songs by multiple composers in 10 years.

‘Ferne Geliebte’ (Distant Beloved) juxtaposes compositions from the two great Vienna schools, Viennese Classicism on the one hand, represented by Haydn and Beethoven, and the Second Viennese School with Schönberg and Berg on the other. The connection between them all is their preoccupation with loneliness, longing and hopeless love.

Christian Gerhaher is accompanied on the piano by his permanent duo partner Gerold Huber.

a recital of rare and compelling musical intelligence and integrity of response...But as well as the intellectual satisfaction of this recital, there is also the sheer delight of Gerhaher's superbly cultivated baritone, and his outstanding artistry. If ever art concealed art, it is here

Admirers of Gerhaher...will need no encouragement to...be re-acquainted with his beautiful baritone, clean diction and highly cultivated interpretative stance. The programme he has selected with pianist Gerold Huber will not, however, appeal to everyone...though the softness of Gerhaher’s timbre and the intelligence of his word-painting gives them an ideally seductive cushion.

The Beethoven cycle immediately reacquaints us with Gerhaher's familiar virtues of a beautiful, even voice and unforced clarity of diction...Others have portrayed more suggestively the highly coloured, alien dream-world the cycle seems to inhabit...but few have shown how intimately Stefan George's poems determine the pitches and rhythms of Schoenberg's singing combines lyrical beauty with meticulous detail.

Gerhaher is now clearly at the peak of his career, as regards his ability to align beauty of sound to remarkably sincere and unfussy delivery of text...The whole of the programme is presented with consistently elegant and thoughtful artistry...[Huber is] a superbly sensitive partner throughout

Gerhaher delivers text so incisively and with such vitality that these songs leap from the page more vividly than ever before. I doubt that the Schoenberg and Berg cycles have been more lyrically sung, either. Huber’s expressive playing is vital to this indivisible partnership’s most challenging, but ultimately most rewarding, achievement on disc.

He treats the cycles with the same care for the meaning of every word, beauty of tone, subtle emphasis and shading...Both the Schoenberg and the Berg are usually sung by a soprano or mezzo...But hearing them juxtaposed in such poised performances – Gerold Huber is Gerhaher's acutely sensitive partner – seems totally logical.

Rather than a purely beautiful voice, Gerhaher's approach is intently text-focused, making the consonants sound as strongly as the vowels, responsive to every twist and turn of the poetry.

The Independent on Sunday 22nd July 2012

Gerhaher is an unrivalled lieder singer, and his partnership with Huber is a reproof to the one-night-stand recitals brokered by many record labels.