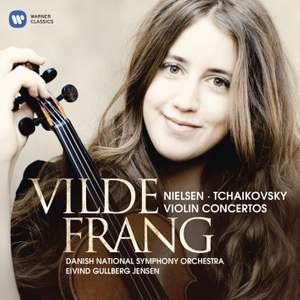 Frang makes almost as much of a strange adventure out of the Tchaikovsky Violin Concerto as she does of Nielsen's typically quirky specimen...There can be no higher praise for Eivind Hullberg... — BBC Music Magazine, August 2012, 4 out of 5 stars More…

I. Part I: Praeludium - Largo

In her third release for EMI Classics the energetic young Norwegian violinist continues the idea of Nordic and Russian concerto pairings established with Sibelius and Prokofiev Concertos on her first album. Here the famous romance of Tchaikovsky’s well-loved violin concerto and Scandinavian poise and unique colouring of Nielsen’s concerto are presented in a rare coupling together on disc.

Danish composer Carl Nielsen wrote his violin concerto during the summer of 1911, in a small Norwegian lakeside hut belonging to fellow composer Edvard Grieg. The concerto is very close to Vilde’s heart, being written in her homeland Norway and premiered in Scandinavia by Danish violinist Peder Møller and the Royal Danish Orchestra. It is a work she is very keen to record and champion. The concerto is unashamedly developed around enticing melodies, giving it a delicacy and simplicity and conjuring up that sense of spaciousness which is so much a part of Scandinavia’s musical and physical landscape.

Tchaikovsky’s Violin Concerto needs little introduction and is perhaps the most famous of all violin compositions. It is also regarded as one of the most technically difficult pieces in the repertoire and so is a brilliant showcase for Vilde’s hugely assured virtuosity.

Vilde recorded her debut album with EMI at the age of 22. The recording of Violin Concertos by Sibelius and Prokofiev released in January 2010 was enthusiastically reviewed “rarely has this music sounded so tender, so intimate or so lyrical” (Financial Times) and Independent Record Review called her “prodigiously gifted”. The disc won Best Classical Release at the Norwegian Grammy Awards.

She has been compared to a young Anne-Sophie Mutter, with whom she often performs.

Frang makes almost as much of a strange adventure out of the Tchaikovsky Violin Concerto as she does of Nielsen's typically quirky specimen...There can be no higher praise for Eivind Hullberg Jensen and his mellow, warmly recorded Danish orchestra than to say that they're unobtrusive but always likeable companions, matching Frang's chamber-musical sensitivies

You can hear more extroverted and confident performances of the Nielsen concerto elsewhere, but Frang’s elfin delicacy and honest individuality are compelling. And the concerto actually sounds like Nielsen’s here, which it too often doesn’t...Frang’s lack of nostalgia – her vigour, irreverence and imagination – makes her a vital and refreshing force.

it's the individual moments [of the Tchaikovsky] that stand out. In the Canzonetta, her very quiet entry portrays a sense of fragility, yet before the end of the first phrase her playing has become uninhibitedly emotional...I found Frang's Nielsen quite a revelation...[she] emphasises the music's kaleidoscopic aspect, bringing out the poetic quality of many episodes...All in all, it's a most appealing performance.

Frang makes a bold impression with the Bachian multiple-stopping of the opening chords [of the Nielsen]...She brings an even greater spectrum of tonal colour and expressive shading to this music than her outstanding Danish counterpart Nicolaj Znaider...and her virtuosity is second to none...[the Tchaikovsky] deserves to stand beside classic versions

Frang shows her mettle as soon as she touches Tchaikovsky’s first principal theme, inflected with dynamic dips and weavings guaranteed to make any listener sit up...Solid technique sees her through every peril Tchaikovsky offers, leaving her free to add wit to the dancing finale...The Nielsen itself brings its own special pleasures.