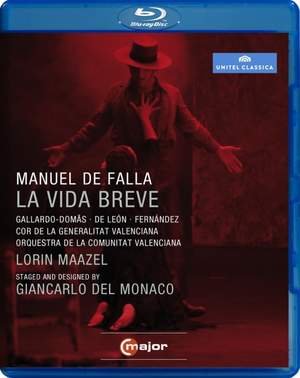 Gallardo-Domâs is vocally dominating and give a remarkable study in physicality and sexual frustration...Jorge de Leon as the faithless Paco and Maria Luisa Corbacho as the Grandmother are also... — BBC Music Magazine, February 2013, 5 out of 5 stars More…

Released for the first time on DVD and Blu-ray!

A national monument in Spain, Manuel de Falla’s La vida breve is perhaps the greatest opera ever written in the Spanish language. A kind of ‘tragic zarzuela’, it unites verismo atmosphere, Andalusian local colour and a score shimmering with reminiscences of French Impressionism.

Gallardo-Domâs is vocally dominating and give a remarkable study in physicality and sexual frustration...Jorge de Leon as the faithless Paco and Maria Luisa Corbacho as the Grandmother are also powerful presences...Maazel conducts with fire, and the ensemble dances are vividly staged. A short, unhappy life, magnificently rendered.

this highly sympathetic video reveals the piece's strengths without trying to convince you that it's something more than it is...It's a compliment to say that a number of moments are hard to watch because the emotion is so undiluted...[Gallardo-Domas's] theatrical savvy is such that she can sustain her emotional torment during long non-singing passages. Vocally, the role fits her like a glove...Other voices are all excellent verismo-weight singer

Its brutality is reinforced by Giancarlo Del Monaco's production. Although the stage is large, the stark setting...gives a suffocating sense of claustrophobia...Tempos tend to be slow, often hypnotically so; and even when they're not, Maazel's stress of dark colours and his bass-tilted balances give the music a consistent sense of threat...Gallardo-Domâs holds us in her grip from her opening notes.