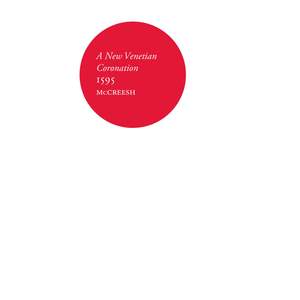 This is a marvellously handled recording conjuring up a ‘live’ event that is greatly aided by the opening bell-ringing and the ethereal spacious surround of the chanting. — BBC Music Magazine, Christmas Issue 2013 More…

Bendinelli: The Mass: Arrival of the Doge: Toccata 26

Gabrieli, A: The Mass

A new Venetian Coronation from Paul McCreesh and the Gabrieli Consort, and a reconstruction of a typical Italian Vespers programme from circa 1612 from Robert Hollingworth and I Fagiolini.

The Gabrieli Consort and Players return to the programme that put them on the musical map when it was originally recorded and released in 1990: 'A Venetian Coronation 1595' is a musical re-creation evoking the grand pageantry of the Coronation Mass for Venetian Doge Marino Grimani. His love of ceremony and state festivals fuelled an extraordinary musical bounty during his reign and formed the background to the musical riches of the period, especially to the works of Giovanni Gabrieli. With cornetts, sackbuts and an all-male consort, Paul McCreesh fully exploits the dazzling polyphony of Andrea and Giovanni Gabrieli’s music and captivates the audience in a theatrical and ceremonious performance.

Two decades later, the Gabrieli's 'New Venetian Coronation' takes advantage of huge developments in early instruments, performance techniques and research into the pieces that were on the original (as well as advances in recording techniques).

This is a marvellously handled recording conjuring up a ‘live’ event that is greatly aided by the opening bell-ringing and the ethereal spacious surround of the chanting.

this is a marvellously handled recording conjuring up a 'live' event that is greatly aided by the opening bell-ringing and the ethereal spacious surround of the chanting. Musically the stars of the show are the works composed by the Gabrielis, uncle and son...Giovanni's Omnes gentes ends the show in magisterial form

McCreesh's feel for the shifting colours of polychoral music was always firm but he finds extra variety here with greater use of solo voices - most memorably in Andrea's O sacrum convivium. The many who treasure that first recording should feel no need to discard it; but this second, with its new wisdoms and refinements, certainly has its place.

If possible, it’s even more atmospheric than the original, with additional pyrotechnics, and the Doge’s jubilatory cornets and sackbuts are splendidly brazen and carnivalesque. What remains constant, however, is McCreesh’s abiding passion for the works of his ensemble’s namesakes...full-blooded, evocative music-making which oozes dedication and enthusiasm.

Even if you own the classic Virgin disc, this new version is a must-buy.

This is a more cinematic affair [than the first 'Venetian Coronation'], frosted with ambient sound as the bells ring out from St Mark’s Basilica. Shawms join the arsenal of natural brass. Toccatas and intonazione from four organs describe the gilded chapels, while the mass is sung with solo voices and a suave consort of cornetts and sackbutts. Pitch perfect.

It is a veritable feast of early renaissance music, recorded at Douai Abbey in Berkshire...where the acoustics are ideal. Splendid book-style production, with evocative b&amp;w photos. Recommended with enthusiasm.