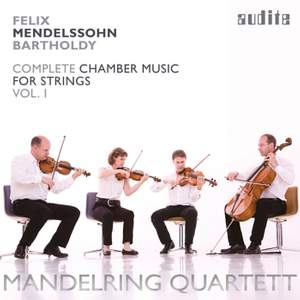 The Mandelrings make an appealingly muscular sound but without the sense of jostling egos one often hears in recordings of quartets by groups this mature...The accuracy of articulation and tuning... — Gramophone Magazine, October 2012 More…

Following their successful complete recording of the 15 string quartets by Dmitri Shostakovich, the Mandelring Quartett now embark on their next extensive recording series: Mendelssohn Complete Chamber Music for Strings, including the Octet and the two Quintets (together with the Quartetto di Cremona and Gunter Teuffel), presented on four SACDs in total.

The first volume of this new series features a youthful work by Mendelssohn as well as the early master works, Op. 13 and Op. 12.

Even if Felix Mendelssohn composed far fewer string quartets than Haydn, Beethoven or Schubert, they nonetheless embody a musical romanticism that appears in Novalis’ Hymns and Eichendorff’s Novellas: a whispering within nature, at times with dramatic agitation, permeated by deeply felt chants. And even the quartet in E flat major, written by the 14-year-old pupil of Carl Friedrich Zelter, the Berlin composer and consultant to Goethe, implies that Mendelssohn would imaginatively maintain the musical legacy. This legacy had one name, first and foremost: Ludwig van Beethoven. Following his death in 1827, Mendelssohn composed his first mature quartet, Op. 13, which explores Beethoven’s formal ideas but, entirely romantically, places the song “Ist es wahr?” at its centre. This work, as well as its successor, the quartet Op. 12 (the chronology of publication is the reason for the reverse numbering), proves to be formally highly advanced and reveals Mendelssohn as a sophisticated musical narrator – a facet which also attracted criticism from his contemporaries.

The Mandelrings make an appealingly muscular sound but without the sense of jostling egos one often hears in recordings of quartets by groups this mature...The accuracy of articulation and tuning add a further dimension of enjoyment to this sense and they always stay on the right side of sentimental.