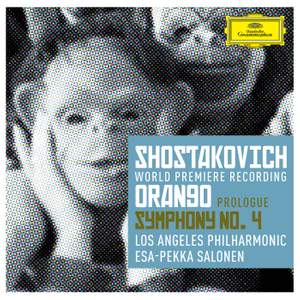 The Prologue makes a curious yet first-rate companion to the mighty Shostakovich Four. Salonen's approach to this half-human, half-monster Symphony is well-calculated...the LA recording adds... — BBC Music Magazine, October 2012, 4 out of 5 stars More…

Esa-Pekka Salonen conducts the world premiere recording of an embryonic opera which Shostakovivch abandoned partway through the Prologue, fleshed out and orchestrated here by Gerard McBurney.

Commissioned to commemorate the 15th anniversary of the October Revolution in 1932, Orango tells the fantastical story of a human-ape hybrid, who, through a combination of sleazy journalism, stock-exchange swindles and blackmail, rises to become a ruthless newspaper baron

Because of its explosive political and musical content, Shostakovich left Orango unfinished. The score remained forgotten until 2004, when a 13 page piano score was found in Moscow

At the request of the composer’s widow, Gerald McBurney orchestrated the Prologue to Shostakovich’s lost opera. Its World Premiere took place at Walt Disney Hall on December 2nd, 2011, with the Los Angeles Philharmonic conducted by Esa-Pekka Salonen

On a Mahlerian scale and ranging from the darkest tragedy to dreamlike sequences of music-hall and silent-film music, Shostakovich’s Fourth Symphony is one of his most dramatic and revolutionary symphonic works. Forced by austere Soviet authorities to withdraw the radical symphony shortly before its premiere, the work was first heard in public over twenty five years later, when the composer is reported to have said, “I think in many ways the Fourth is greater than my later symphonic efforts”

The booklet contains essays by orchestrator Gerald McBurney, who tells the story of Orango’s rediscovery, and by renowned iconoclast director, Peter Sellars, who staged the work at its long-awaited Los Angeles premiere.

The Prologue makes a curious yet first-rate companion to the mighty Shostakovich Four. Salonen's approach to this half-human, half-monster Symphony is well-calculated...the LA recording adds much to our understanding of an extraordinarily complex giant.

[The Prologue] comes rip-roaringly off the surviving piano score in Gerard McBurney's spookily authentic orchestration...It's a composerly account [of the Fourth] in which every thematic connection, however oblique, has something to say. Clarity is forensic, with the Los Angeles Philharmonic achieving levels of precision that can...totally suspend disbelief.

McKinny is a Master of Ceremonies of tangible malevolence...Salonen gets a lively response from his choral and orchestral forces, pointing up the music's humour to the audible enjoyment of the audience...this occasion may well be the first time [Salonen] has tackled one of the symphonies. The Fourth is the right choice in that its combining wilfully disparate material with an essentially pluarlistic idiom plays to this conductor's interpretative strengths.

does the prologue work as a stand-alone piece? Emphatically, yes...This is vintage Shostakovich, big, bold and biting, the fine soloists and chorus believably balanced...McBurney and Salonen exercise good judgment with this intriguing score..Worth it for Orango alone; look elsewhere for the symphony.

Dramatically, there are echoes and anticipations of other twentieth-century opera...McKinny makes an oleaginous, sinister Master of ceremonies...[Brancoveanu] his role in the Prologue gives him little to work with other than a series of groans, yawns and the odd inarticulate phrase, but even with these limited resources he manages to convey the ape’s dangerous pent-up strength and almost Calibanesque poetic sensibility.

Even if some of the music [of Orango] sounds thin in this Gerard McBurney orchestration, Esa-Pekka Salonen’s LA forces give it five-star treatment — the rising American tenor Michael Fabiano is outstanding — and it serves as an agreeable bonne bouche to Salonen’s stupendous account of the bewildering Fourth

[Orango's] trenchant wit and seriousness of satirical purpose leave you wishing more of it had survived...Salonen conducts [the Fourth] with cool lucidity and a sense of remorseless logic...The immense climax of the finale isn't as shattering as it could be, but elsewhere Salonen's fondness for clear textures is very much in evidence, and often admirable.

the piano score of the prologue to Shostakovich's abandoned opera Orango blazes with colour in Gerard McBurney's orchestration.

Salonen’s forces throw themselves into the affray with plenty of pep. Ryan McKinny acquits himself well as the Entertainer, master of ceremonies at a big Soviet rally...the [Symphony] cackles and grimaces with more vigour than Orango...there’s a bright heat and clarity here

Deborah Borda on the story behind the Orango manuscript